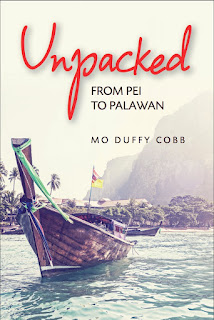 PEI Author Mo Duffy Cobb’s debut offering, Unpacked: From PEI to Palawan, is a travel memoir of a young family, brokenhearted and hungry for change, that take off on an around the world journey of love and redemption. Recently we spoke with the scribe about the work.

When and why did you want to be a writer?
I've always wanted to be a writer, from about Grade 8 on. I knew I was passionate about it and I had fun with it, but I didn't know if I would ever be good at it. After I completed BAs in Literature and Education, I journaled furiously. It wasn't until I attended my first Memoir workshop that I started dedicating myself to making writing a daily practice in a funny and sweet little blog I called, "FurtherMo: A blog of Exploratory Proportions." The blog allowed me to become comfortable in the medium in a very low-stakes way. Eventually, Nova Scotia author Christy Ann Conlin told me I should do a Masters in Fine Arts in Creative Nonfiction, which I pursued at Vermont College of Fine Arts. That's when things started to really flourish. As for why, my intention was always to record my thoughts and feelings for posterity. But the more I wrote, the more my essays became loaded with messages. Whether it was about my daughter growing up faster than I did, or my struggles around losing a baby, my essay style seemed to resonate with people. They all seemed to carry this emotional charge.

Are they the same reasons you do it today?
Today I am tackling more and more complex issues, but most around pre-determined settings of structure and craft. Working as a freelance writer has given me confidence and variability. I am now comfortable with this narrative voice that has weight, that once seemed flighty and unsettled. I still write my way through the darkness - from places of anxiety, of vulnerability. I am less motivated to create perfect pieces for publication, because I know now that it is the practice of writing that is important. That practice is something that is deeply personal, that is inspired by my life's experiences, and that stays with me. Headlines come and go, although it is nice to have a few, now and then.

What inspired you to write Unpacked?
Unpacked was inspired by a cold wintry day in March, 2008. My husband and I were pregnant with our second child, who arrived to this world stillborn due to a cord accident. The next few weeks and months were tumultuous as we decided how to move forward. We decided to take our daughter - who was two at the time - to Europe and Southeast Asia for the year, to move through the stages of grief together as a family and to wander shores, carve paths in jungles, and absorb languages and currencies in real time, all while giving us the time to heal from our family's loss. I became motivated to write about it when I realized how much meat there was there, the young family's incredible journey coupled with the mom's interior landscape of loss. How would she, how could she, move on.

What was the most challenging aspect of the process?
The most challenging aspect of the book was, for one, taking myself back to those private spaces of slowed time. Writing about the night we lost Tya, and taking responsibility for the conflicts that arose with the people around me, those were the most emotionally challenging aspects of the book. The other challenge of the memoir was structural, the arrangement of chapters and the strategic positioning of when memories should be revealed to the reader. There was this overarching awareness that the reader would need a lot of time to process what's happening to the narrator, too.

What was the most rewarding part of the experience?
The most rewarding part of the experience for me was my publication story. I spent almost two years querying the story to everyone who would listen, but the reality was that not a lot was known about the "marketability" of the book - who my main audience would be felt a little uncertain to many publishers. I decided to take a chance and signed up for Word on The Street's "Pitch the Publisher" nonfiction competition. It's a public event, and I got three minutes at the mic to pitch my story to a panel of publishers: Susan Alexander of Goose Lane, James Lorimer of Formac Publishing, and Lesley Choyce of Pottersfield Press. The first two publishers said they weren't really interested in publishing travel literature, and that it was too much of a departure for them. But Lesley of Pottersfield said, "I do love a good memoir," and I finally knew who to go after. The rest is history. 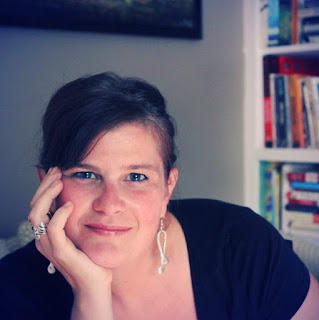 What did you learn during the process?
I learned that I needed to trust the readers, and that they could trust me. That meant being honest with myself, and in turn with them, that the story became a realistic portrayal of events instead of the earlier drafts where "everything was perfect." I also learned to distance myself from the story, which was sometimes a challenge. But it's imperative when you're writing creative nonfiction that while you may have a role in the story, it doesn't need to always be about you. In fact, it's better when it's not. It's that act of taking things from the personal to the universal that really has the biggest impact on readers.

How did you feel when the book was completed?
It was major personal accomplishment territory, although I struggled with where and how to end the story. I wrote the last chapter and the first chapter together, to create a mirror for the narrator to reflect on. I felt great when the original drafts where done, but it wasn't until the book was published that I really began to feel like a "real writer".

What has the response been like so far from those that have read it?
There has been so much incredible feedback from readers thus far. I've gotten emails, calls, and so many messages from people who just couldn't put the book down. Friends have even confessed that they had to read all night, just to see what happened! Many readers love the "armchair travel" feel to the book, and of course want to share it with people in their own lives who have had similar struggles with loss. I feel so blessed that I've been able to share this journey with other Maritimers, and people around the country, too.

What makes a good book?
Being able to laugh at yourself like Bill Bryson during the comedic and unruly nature of travel. The honesty that brings people to tears. Poetics. Great storytelling. The delicate - sometimes precarious - balance between internal and external journey in memoir.  A smash opening that hooks the reader. Bravery. Amazing juxtaposition like Khaled Hosseini in A Thousand Splendid Suns. Truthful, revealing characters in fiction, who are sometimes painfully themselves (Anne of Green Gables). The flawed hero who is finally able to rise above.
Verified account

Is your creative process more 'inspirational' or 'perspirational'?
Most of my work is deadline-oriented, so I would probably fall more on the perspirational side!  Especially with a young family, most times I am down to the last days or last hours of writing before a piece is due. My magazine, Cargo Literary, publishes transformational travel stories, and sometimes those deadlines can also get in the way of creative work. My best essays, the most inspirational ones - I think - are ones that simmer for weeks until there is either a way in or a way out, until the angle is established or the arc completed. Then it's just time for the words to pour onto the page.

What are your thoughts on Atlantic Canada's literary scene?
I serve on the Board of Directors for the PEI Writers Guild, and we have a thriving literary scene here on PEI with workshops, open mics, retreats, and writers socials.  This year we partnered with Reading Town Canada to celebrate our Island Literary Awards in May, which was almost a full week of literary activities. There are also many opportunities for New Brunswick writers to engage with the Arts with their WordSpring and WordsFall events, and we're hoping to do more collaborative events with them in the future. And of course, the Writers Federation of Nova Scotia also has many different events, including Word on the Street in September. Atlantic Canada is a great place to be creative because there is so much support for everything local.

What's next on your creative agenda?
I am hoping now to delve back into my favourite medium - the personal essay. It's my hope that my next book will be a series of essays that will work with the theme of coming of age as a Mom. I'm working a lot with expectation these days, as I approach my later thirties:  what I had planned, how I approach my life now, and whether or not I will ever be settled in the future. All of these remain questions. Cargo Literary will also be publishing its first Anthology this year, our first time in print after nine digital issues so far, so I am really looking forward to that.