Dedicated to the Revolutions - review by Stephen Patrick Clare 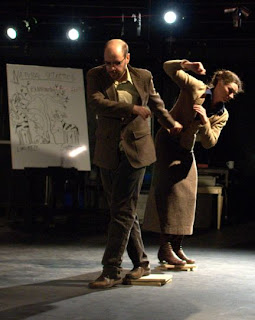 Imagine if Canadian indie rockers Broken Social Scene were to put down their musical instruments and take up theatre-company props and you might get some idea of how Week 2 of the SuperNova Theatre Festival kicked into gear at the Neptune Theatre in Halifax last night.

Dedicated to the Revolutions is a unique collection of inspiring - and often quite amusing – improvisational vignettes brought neatly together by Toronto’s Small Wooden Shoe.

Using clever and creative ‘round-the-house props, including tin-cans tied with string, badminton birds, drawing boards and Jenga blocks, the troupe did well to challenge our perceptions about progress - at one point even suggesting that perhaps we have not actually evolved at all as a species over millions of years, but have merely changed – an important distinction.

While fresh and fluid for the majority of the 90-minute performance, the piece did weigh down on occasion under the weight of numbers – literally – as cast members worked out complex mathematical equations on drawing boards while audience members waited patiently.

Still, and to the crew’s credit, the unique stage layout and myriad of background activities never took away from the dissertation and dialogue. And although inter-actor, on-stage chemistry does not appear to be mandatory for this particular production, it was still at hand throughout much of the performance, particularly during the numerous musical interludes – a nice break from the sometimes heady material.

Kudos to the crew at Eastern Front Theatre for challenging us with something a little out of the ordinary – and although seemingly scattered at times, Dedicated to the Revolutions carries enough sure and recognizable signposts to keep audiences engaged, entertained and enlightened.