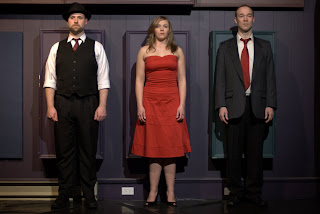 Rest assured - this is much more than a one-night stand.

The witty, wacky and sweetly eccentric production “So…what about love?” - which originally debuted at the Fringe Festival in Halifax in 2009 - opened to a packed and enthusiastic house at the Neptune Theatre as the SuperNova Theatre Festival continued its final week of performances.

Written and performed by Andrew Chandler, Garry Williams and Amy Reitsma of DaPoPo Theatre (Halifax, NS), the play features three quirky lovers, Helen, Larry, and Willie who suddenly find themselves on stage, nearly naked and expected to perform a musical about love. So, in a pseudo improvised, parodic pageant of ironic musical scores scattered between nostalgic monologues these endearing characters literally bear it all, exploring the arc of like, love, lust, and loss and the unfortunate side effects.

Armed with clever props and costumes, a backdrop of burlesque minimalism and their own personal pianist, the characters spout spontaneous songs and long-buried stories on everything from childhood fairytale fantasies to the disillusionment of adulthood. Showing themselves at their most vulnerable, the cast immediately develops a committed relationship with the audience, holding our attention until the very last tableau. As a result we too have engaged in an exploration of relationships as performance in this clever postmodern romp that still leaves room for optimists. At once both comedic and dramatic, “So…what about love?” leaves a bittersweet taste, like any love affair ended, and the temptation to return for more.