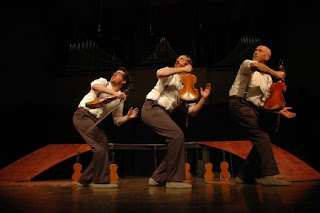 The SuperNova Theatre Festival kicked off its 18th season on a high note at the Neptune Theatre in Halifax last night with Emile’s Dream, a 90 minute montage of the life and legacy of Newfoundland fiddle legend Emile Joseph Benoit.

The Black Duck Brook native, who died in 1992 at the age of 79, rose to fame in the 1970’s and 1980’s – well after his retirement as a fisherman - recording three albums and entertaining audiences around the world with his unique brand of Franco-Newfoundland music.

The two-act, three-person performance (courtesy of St. John’s-based Artistic Fraud of Newfoundland) did well to weave a variety of threads into a warm, witty and wonderful biographical quilt.

Set upon a sparse stage of simple floor risers and violins dangling en circle like le grand chandelier, Benoit’s humility and humble nature were gently brought to life through a series of musical and storytelling vignettes.

Sans sentiment, the clever call-and-response chemistry between actors Kelley Russell, Sandy Gow and Phil Churchill produced a variety of voices that kept the piece moving along at a quick clip.

Themes of joy, happiness and gratitude were plentiful, while subtler cultural references and snippets of le slang Acadien left just enough space for the audience to fill in the blanks.

Benoit himself often joked that he had “saved the best for last” in his life - so too for last night’s performance, with a stirring, show-closing accapella number by the trio that faded as the fiddler’s own voice rose from the house speakers – made even more moving with members of his immediate family in attendance.

Credit Eastern Front Theatre’s artistic director Scott Burke and his peers for starting strong this year – if Emile’s Dream is any sign of what they have in store for theatre-goers over the next 12 days then be sure to get your tickets now. www.easternfronttheatre.com