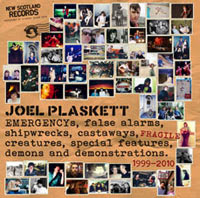 As a compilation of “demos, outtakes, rarities and B-sides” from the last decade of Plaskett’s east coast nostalgia-rock—the poetic yet humorous title is an apt representation of all the roads this local musical hero has traveled. A Deeper and rougher collection of 20 recordings pulled from the archives, “Emergencys” showcases the playful artistry that has become Plaskett’s claim to fame.

With the fable-like observation that fans have come to expect, songs collected on “Emergencys” are at once lullabies and rock anthems, making it a choice album for anyone who enjoys swaying melodically to music that laps gently, familiar and consistent as a rolling wave. Tunes vary between those like “Extraordinary”(2002) that can be ingested slowly like a fine ale, to the saxophone-heavy Southern-rock inspired “Blood in My Veins”(2005), and those that—like messages in bottles—bob softly in search of a receiver on another shore (“Romantic Riot” 2004, “Nothing More to Say” 2004).

Ending on an ironic note with 1999’s “Waiting to Be Discovered”, “Emergencys” pays a humble yet celebratory tribute to the impact Plaskett has made on the East Coast music scene and internationally, and primes the listener for what’s yet to come.