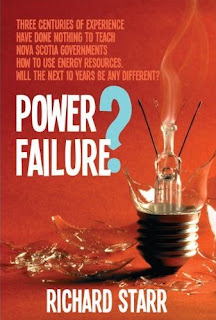 Nova Scotia author, journalist and broadcaster Richard Starr has drilled deep into his reserves of experience as a public servant, political staffer and policy advisor to produce a complete, yet completely digestible portrait of futility and frustration in his latest book Power Failure? Recently Arts East spoke with him about the work.

AE: What inspired you to write Power Failure?
RS: I had several reasons for writing this book. First, I've always been interested in non-fiction stories about politics and economics in the Maritimes. In thinking and reading about those topics I was struck by the role that energy has played both in creating our economic problems and in offering unrealistic, politically-inspired solutions to them. My experience as a journalist and political researcher put me in touch with energy issues like the privatization of Nova Scotia Power, the offshore, the Westray disaster, renewable energy. These events created lots of headlines - and in the case of Westray several books - but there was nothing out there putting these events in any kind of overall context. So I wrote Power Failure? to give readers a better sense of the context of the regular headlines about energy issues and to provide a better basis for public debate.

AE: What were some of the challenges of writing the book?
RS: A major challenge was the scope of the book. There's lots of secondary material on the coal industry, which dominated the energy story for 250 of the 300 years covered in the book. That took a while to synthesize. For the other sectors - and for events over the last 40 years - there's not much in the way of published sources so that meant long hours going through government documents and newspaper microfilm.

AE: What were the rewards?
RS: The research process is rewarding in itself. I learned a lot about our history. In the end, when the book comes out the reward is feeling that you may have a handle on the story and the work may be of benefit to others.

AE: What has the feedback to the book been like so far?
RS: Fairly muted, but positive. One reviewer was kind enough to write that "it will stand as the standard history of Nova Scotia energy politics for years to come." I've heard from a couple of engineers who appreciated the book, which is good because it suggests I got the tricky technical stuff right. And a retired journalist (who happens to have been my night editor when I started in the news business way back when) gave my writing style a thumbs-up. Given the nature of the subject I am not expecting a big public response. This is not bedside reading. Nor do I expect politicians to say much. Energy has been and continues to be a political football and my book takes some of the air out of the ball.

AE: In your estimation, what are the real issues facing the province's energy sector today and what are the solutions to those issues?
RS: Nova Scotians need reliable, affordable energy to keep the lights on, heat their homes and businesses, run their factories and move about, and from now on that energy must be generated using much less fossil fuel. It's a complex problem, and as I say in the book, we need a better way to tackle the problem than we've had in the past when decisions were usually made behind closed doors and for primarily political reasons.

AE: What's next for you? Will there be a sequel?
RS: The book cover says "Three centuries of experience have done nothing to teach Nova Scotia governments how to use energy resources. Will the next ten years be any different?" In a few years I may want to do a progress report on that question, or if I'm still kicking in 2020 I may want to look at the full ten years. In the meantime I'm researching a book on the impact on the Maritimes of 30-plus years of neoconservative politics in North America. If things go as planned, that'll be out in late 2012.