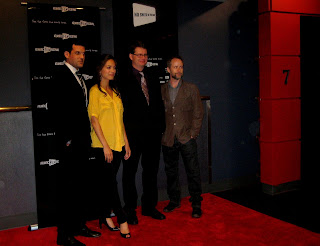 Director/producer/screenwriter of the indie film Rob Heydon, as well as the three main actors (Adam Sinclair, Kristin Kreuk and Billy Boyd) attended: no glam or razzle dazzle – just four down-to-earth people there to celebrate the opening of their film, humbly thanking the audience for sharing this moment with them.

Toronto-based Heydon began work on adapting Irvine Welsh’s (author of Trainspotting) novella over a decade ago. It took years to tinker with the script and to secure adequate funding. After filming finally began in December in 2010, Ecstasy was completed just two weeks ago, just in time for the Atlantic Film Fest.

During the Q&A, Sinclair said when he read the script six years ago he knew, he had to play the role of Lloyd Buist. He also had once been a part of the rave scene in Scotland that seemed to bring peace among those who were previously in conflict, although he did not have to swallow or carry drugs up his ass. Sinclair is triumphant as the partier/smuggler. From his subtle facial expressions to his tonal transitions from sober to high, it is difficult to believe this is his first lead role.

Boyd (Lord of the Rings) is hysterically energetic throughout as he tries to recruit more followers to the “church of ecstasy” and teaches fell patients in the mental hospital how to play in an orchestra. Kreuk (Smallville) proves that she is more than just a pretty, alright gorgeous, face; her portrayal of Heather compliments the story’s theme – the love between “ying and yang”.

Visually, through time-lapse and sometimes blurry imagery, and auditorily, through electronica tunes from a stellar list of musicians, you will indeed feel like you’re dropping E. You will also feel the chemical high of love versus lust as the tale weaves, in the words of Heydon, from “love of ecstasy to ecstasy of love”.

Ecstasy is not merely a revisit of Trainspotting. It is also a coming of age story, albeit a delayed coming of age; it is a love story that shifts between real and simulated pleasure. ~ Michelle Brunet