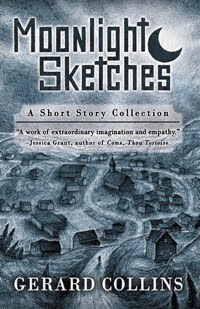 Gerard Collins was born in Placentia, Newfoundland, and currently resides in St. John's where he is a writer and university lecturer at Memorial University. He has a Ph.D. in English and has won several prizes for fiction, including the Percy Janes Award, and has been shortlisted for The Cuffer Prize. Collins’ work has appeared in Storyteller, Zeugma, TickleAce, Hard Ol’ Spot, and The Cuffer Anthology. Recently AE spoke with Collins about his first book, Moonlight Sketches.

What motivated you to put this collection together?
These stories were written to belong together—each one as a piece of a larger collective. I already had two novel manuscripts set in the fictional town of Darwin. Neither has published yet, but then hardly anyone has seen them yet. But there were other voices to be heard—so Moonlight Sketches began as a series of one-off fringe stories. I wrote the first one, “Tar Cat,” as a personal challenge, forcing myself to meet a competition deadline. When it won, I was both floored and encouraged, so the next year, I did the same thing. Rinse. Repeat. After the third consecutive winning piece, I decided that people seemed to like these stories almost as much as I enjoyed telling them. So over a period of about five years, I rounded out the collection with various stories that made me feel as if Darwin’s diverse elements were heard and seen. The last few tales were written in a two month period in the summer of 2009 while I was recovering from eye surgery. I literally closed my eyes, sat at the computer and wrote without editing. Only after I could see well enough did I start revisions. By the end of that summer, I submitted the collection—later composing one final story, “Our Julia”—and by Christmas, I’d signed the contract. Moonlight Sketches was constructed to be a collection and, while most stories are written to stand alone, there’s a lot of interconnection between them.

Did the book come together quickly or did you really need to work at it?
Most times, a character would clamor in my head to be heard: “Me next!” seemed to be the call to arms. I tried to do justice to each character, letting him or her tell his own story—or having me simply observe and write down what I saw happening. I didn’t manipulate them at all. The one time I tried was with “The Darkness and Darcy Knight” when my editor suggested the ending might be too dark, that it might shock some readers. I actually liked the idea of some people going, “Tut-tut” and “He can’t say that!” I did try rewriting the ending, but we realized the original version was exactly what I was aiming for, shock and all. Overall, the collection came out rather easily, even though it was a long gestation period. It was like trying to gather together all the members of a clan and make sure everyone was accounted for. It was a series of short, quick births for most members and a lot of detail work to turn the family into a cohesive unit. Ultimately, the editing process was easy because I’d already revised them so often.

What was the most challenging aspect of the process?
By far the most difficult part was finding the time in which to write the first draft. I teach English at MUN, and I was actually still engrossed in writing my doctoral dissertation when I published the first couple. So I could only write when I wasn’t doing something related to the academic work, which meant a lot of writing between semesters and on holidays and in the evenings. The real challenge there was finding time to socialize and actually, physically see my family or occasionally talk to them. Although my wife is happiest when I’m doing what makes me happy, and she likes the atmosphere around our place when I’m writing, other people don’t always understand that part—that in order to create, one needs to be alone.

What was the most rewarding part of the experience?
With each individual story that was finished, I felt a great satisfaction, as if another member of the family had been brought to life, as if somehow in getting these stories out I was actually saving or fixing something in my soul. That’s a weird thing to say out loud—and I’ve never thought of it that way until now—but yes, I feel more at peace with every finished story. But there was nothing like the actual moment of acceptance from a publisher. As a writer, that email from Donna Francis changed my life. In some ways, it even saved my life or at least validated or excused a good chunk of it. Not that I am a depressed soul at all—far from it, in fact—but I’d gotten used to the idea of being the dog that chases the car, except when I finally caught it, I knew exactly what to do with it. It’s been an extremely busy summer, and I couldn’t be happier. Promoting my first book is a labour of love. Despite my tendency to be hermit-like, talking to readers is another of the great rewards.

What did you learn during the process?
I learned to be patient with a story. I can show up at the computer to write every day, but if a character doesn’t want to tell his or her story that day, I can’t force it. When you force a story, it gets ugly. I also found that I did my best writing at coffee shops, early in the morning. I discovered that writing short stories was fun and fulfilling. I’d never written many of them before. It was a general rule of mine that if you want to write novels, you won’t get anywhere by writing short stories—think I read that somewhere. But now that I’ve written my own collection, I’ve gained more respect for the form. I guess that’s the other part: I learned how to write a short story—how important the entry and exit points are, how to create suspense, how to hold a voice and avoid sacrificing story for theme or a supposed literary quality. I’ve gained confidence as a writer because all the voices in the collection are so different from each other—now I feel as if I can tackle any voice or subject. And I learned how to write anything. During editing, I learned that the editor is almost always right. They care about the book and that’s valuable.

What has the response been like to the book so far?
I had imagined getting all kinds of horrible reviews, but, in fact, reviewers have been amazingly kind. I think I’m harder on the collection than they are. Nearly everyone remarks that it’s so “dark” and they wonder what kind of mind I have or, worse, what kinds of experiences I’ve had. I’ve come to accept that reaction as a valid one, although I tend to see the light as well as the dark in most of these stories. When a story gets really dark, it’s often just me challenging myself, my own optimism, forcing myself to see the alternate possibilities—that not every good deed gets rewarded, that optimism often gets beaten down. Most readers have been enthusiastic and tell me they’re looking forward to the next one. That’s encouraging.

What happens now? Are you working on something new?
It’s been a whirlwind summer, with a lot of speaking and signing engagements, culminating with a highly anticipated return to Halifax for the WOTS festival in September. I did my Masters at Acadia and lived in Lower Sackville in the mid 90s, spending a lot of time in the coffee shops of SpringGarden Road, and that’s where the fictional town of Darwin first came to me. It was my most creative period, up until now. My next project is a complete rewrite of Finton Moon, the novel manuscript that won the Percy Janes First Novel award a few years ago. That will be submitted to my publisher before I hit the stage in Halifax.

Why do you think that Atlantic Canadians enjoy such a vibrant literary culture?
People often joke that there’s something in the water, and that’s not far from the truth. The relative isolation—that feeling of being distant from the supposed centre of things, where the greatest concentration of people, ideas, decisions and opportunities (such as writing and publication)—has had an effect. There’s a growing acceptance here that it’s finally “all right” to tell our stories and, lately, an emerging sense that it’s okay to be different, to tell your stories whatever way you want to, which leads to experimentation. I see it as a revolution. Atlantic Canadians have found their voice, after centuries of relative silence and ineffectiveness, and they’re shouting their stories from the proverbial rooftops and crow’s nests. I think it frightens Central Canada a bit, so the tendency is to close ranks in the fortress just a bit, but I think there’s plenty of admiration too for what we’ve got going on here. Revolutions are always exciting, if divisive. And they’re always driven by ideals, hard work and sacrifice. As for the readers, I think they enjoy that their stories are finally being told and celebrated, no longer hidden from the world. Telling one’s story publicly is an act of rebellion, an expression of liberty that begets further freedom.

Do you have any advice for aspiring writers?
Read lots. Write lots. Revise, revise, revise. If someone tells you you’re not good enough, work harder. You have to want it more than anything, and the most valuable trait you need, even more than talent, is perseverance. But it helps if you have both. You also have to hone your voice and tell a story that is unique to you. Above all, don’t give up. Quitting is the only sure way to fail. If you can’t handle rejection or you’re tied to the idea of steady pay and a pension, try your hand at something else. Assuming you’ve gotten past all that and are truly determined to be a writer, just write good stories and seek the opinions of people who will be honest with you.