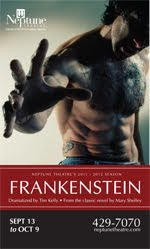 Halifax’s Neptune Theatre launched its 2011-2012 season with a roar last night – literally – as the crackle of thunder heralded-in Frankenstein, Mary Shelley’s classic tale of love, life and death amidst the academia of 19th century Europe.

A close-to-capacity crowd was on hand to welcome the infamous fiend to the stage; a softly-lit, richly decorated parlour serving as the performance’s focal point. Above and behind the arena sat Dr. Frankenstein’s Gothic laboratory, replete with a myriad of mysterious electrical devices, where he gives his greatest – and most gruesome - creation the gift of life.

Despite some difficulty in placing the period - the story was written in 1818, but several modern references were noted - the play was well paced, the plot a place where passion meets precision. The terse, tense dialogue and the sudden, sharp body movements – especially the wonderfully exaggerated hand and facial gestures – achieved their desired air of anxiety and apprehension.

Special mention should be made of Stephen Gartner, who carefully breathed humanity – emotions, ideas, conscience - into the lifeless monster. His superb portrayal of a creature on trial and in transition did well to invite audience members to re-examine creationist mythology, re-explore our own God-like aspirations (Shelley’s work is subtitled The Modern Prometheus) and reconsider the often difficult relationship we have with our own maker.

And kudos to artistic director George Pothitos and his creative crew for skillfully stitching together all of the elements - including an elaborate setting, complex characters, detailed dialogue and a sweeping storyline - into a seamless and satisfying production.
~ Stephen Patrick Clare