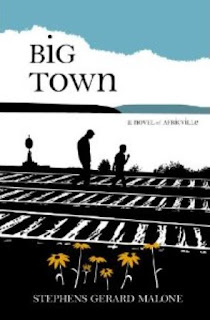 Halifax author Stephens Gerard Malone published his first novel Endless Bay under the pseudonym, Laura Fairburn. His second novel, Miss Elva, followed in 2005 and was short-listed for the Dartmouth Book Award. Malone’s third novel I Still Have A Suitcase In Berlin took eight years to write and was released in May 2008 to critical praise. His latest effort is Big Town, a novel of Africville. Recently he shared his perspective on the new book - and all things literary - with AE.

AE: What inspired you to write this story?
SGM: Africville captured my imagination shortly after I moved to Nova Scotia in 1986. Depending on whom I talked to, it was either a slum the city did right to remove or a long-standing community bull-dozed in the name of industrial development. But why would a former resident protest the destruction of a slum, for decades, and why was there nothing on the site but a park? From a novelist’s perspective, the reasons why were gold, and gold right in my backyard that few had mined.

AE: Did the book come together quickly or did you really need to work at it?
SGM: All my books have a convoluted path to publication, but this one takes the prize. Three different versions, each from a differing point-of-view, innumerable revisions, abandoned for over half a decade, manuscript almost walled up for posterity in a kitchen renovation. Big Town was the book than didn’t want to get published. Then after a symposium given by the Writers’ Union of Canada, I decided to serialize the book for free on my website in the hopes of building a readership for future novels, so I asked Cape Breton writer Lesley Crewe if she’d give me a promotional blurb. She did better than that, and sent the manuscript, the very first of the three versions, off to Nimbus.

AE: What was the most challenging aspect of the process?
SGM: I had tackled history before with I Still Have a Suitcase in Berlin, so I wasn’t worried about getting facts right, but I knew I was dealing with a sensitive and divisive subject. I struggled with actually believing I had a right to talk about Africville. After I overcame that by realizing first and foremost, I was writing about racism, the biggest challenge was just shutting up and letting Early do the talking.

AE: What was the most rewarding part of the experience?
SGM: Times change and now seems right for the dialogue about what happened to Africville, and why. I’m honoured to be part of the growing body of literature on the subject.

AE: What did you learn during the process?
SGM: The old saying that a change is as good as a rest applies to editors.  Patrick Murphy at Nimbus got the character of Early from the get go, and challenged me all through the process to remain true to Early’s troubling perspective. After four novels, I’m still the student.

AE: Did you go through some sort of mourning or grieving once you were done?
SGM: Still going through it. My first visit to the newly reconstructed church will be emotional. I’ll expect to see Early sitting with a dog by the door.

AE: How does that affect you?
SGM: I stopped reading reviews after I got a less than kind review for my last novel on the day my dog died. Now I wait for friends to tell me which ones to read, which to ignore. Head in the sand, I know, but it works for me.

AE: What happens now? Are you working on something new?
SGM: Fiction involving glass blowing.

AE: What made you want to be a writer?
SGM: A cluster of novels in grade 9 and 10, each one of them giving me an out-of-body experience: Nevil Shute’s On the Beach, Ann Fairbairn’s Five Smooth Stones, Harper Lee’s To Kill a Mockingbird, Margaret Mitchell’s Gone With The Wind, John Wyndham’s The Day of the Triffids, and Emily Bronte’s Wuthering Heights. I just knew I wanted to do to readers what those writers did for me.

AE: What makes a good book?
SGM: When you spend an entire weekend reading, moving from the bed, to the sofa, to the chair, back to the bed, not changing your clothes, straining your eyes, ignoring the phone, never turning on your computer, and then turn the last page feeling right down to your bones that you’ve just lost your best friend—that’s a keeper.

AE: What are your thoughts on the current state of Canadian literature?
SGM: I’m blessed to live in a country whose literature ranks among the world’s best. It’s also harder than ever for writers to see any kind remuneration from their art even while they are expected to take precious time away from their writing and devote more on self-promotion in social media. Add into that mix the prevailing belief that readers shouldn’t have to pay, or pay next to nothing, for anything online or downloaded. Books take months, years to write. Are we going to start asking, why bother?

AE: Who are your favourite Canadian authors?
SGM: Damn you Ann-Marie MacDonald! Publish that new novel!

AE: Why do you think that Atlantic Canadians enjoys such a vibrant literary culture?
SGM: Perhaps it’s the isolation from the publishing centre in Toronto. The Atlantic Canadian authors I know seem to be concerned about how the book is coming along, not the business of writing. They value community and don’t view other writer’s competitively, so they aren’t afraid to promote another writer’s work.

AE: Do you have any advice for aspiring writers?
SC: Read. Write. Read more. Assume your work can always get better. Polish till you puke.