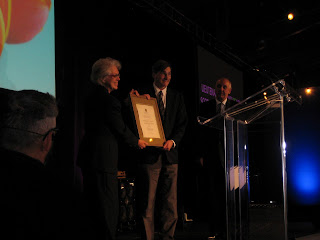 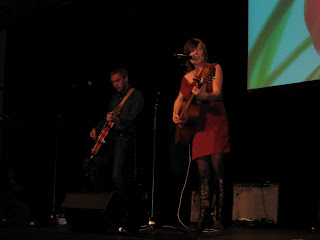 The Creative Nova Scotia Leadership COucil hosted the 6th annual Creative Nova Scotia Awards Gala this past Friday night in Halifax.
The festivities were a true testament to Nova Scotia’s diverse arts and culture scene: presentations were done in both English and French; awards and performances showcased a wealth of milieus, social mores and time periods, from interactive web media and classical piano fused with world music overtones to distinctive dance, film, photography, illustration, theatre and poetry. It was clear by this evening that Nova Scotian artists truly have transcended beyond the categorized kitchen party or fishing-themed watercolour.
Award finalists and winners ranged from being born and bred in Nova Scotia to living in the province for several years and now calling it home. The first accolades presented were the Established Artist Recognition Awards ($5,000 per artist). Of the ten finalists, those who triumphed were Simon Docking (classical pianist and composer), Sue Goyette (poet and novelist), Sheilagh Hunt (dancer and choreographer), Daniel O’Neill (painter, printmaker and teacher) and Dinuk Wijerante (composer, conductor and eclectic pianist).
Chéticamp was presented with the Community Arts and Culture Recognition Award ($10,000 prize) for promoting arts and culture in its region and preserving Acadian traditions through the Conseil des Arts de Chéticamp. Alfred Poirier accepted the award on behalf of his township , telling the audience that they were welcome to downtown Chéticamp anytime. He also congratulated his fellow nominees (Antigonish and Christmas Island) and stated that together they could continue to encourage the Nova Scotia arts thrive.
A momentous occasion during the gala was when photographer, collage artist, filmmaker and community mentor James MacSwain made his acceptance speech upon winning the Portia White Prize ($18,000). At one point he decided to honour past recipients of the award, including George Elliott Clarke and Alistair MacLeod, by singing each of their names, which earned him a standing ovation. As part of this accolade, MacSwain had the choice of selecting any arts organization to be awarded a $7,000 protégé prize – he selected the Visual Arts Nova Scotia’s mentorship program.
The final decoration, the Lieutenant Governor of Nova Scotia Masterworks Arts Award, went to David Clark for his “88 Constellations for Wittgenstein”, an experiential web piece that combines the technical and philosophical through captivating imagery. Clark, surprised to win, pronounced at the podium, “I feel like I was just awarded a shipping contract”.
In true awards show style, presentations of accolades were spread out amongst musical and dramatic performances. Among these were the adorable Jamie Junger and his 5-year old daughter Sadie singing “Lazy Old Moon”, from their kids CD “Fishing for Pickles”. Sadie impressed the crowd with her beautiful voice and keen harmonica skills. Three Sheet, an organic-roots hip hop group, energized the crowd with their beautiful vocals, electric guitars and EMC’s multilayered beat-boxing skills without the need for any looping equipment.
At one point during the evening, Minister of Communities, Culture and Heritage David A. Wilson highlighted the value of the province’s five-point plan (announced earlier this year) in terms of promoting sustainable culture and arts. If all goes according to “plan”, each successive Creative Nova Scotia Awards Gala should be more diverse and fruitful than the last. ~ Michelle Brunet