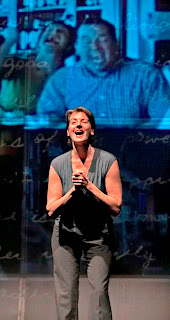 By Cathy Ostlere
October 21, 2011
Neptune Theatre, Halifax
It is a rare feat for any individual to capture an audience’s attention for a full 90 minutes. However, Jan Alexandra Smith did just that at the Neptune Theatre in Halifax last night with her poignant and powerful one-woman production of Cathy Ostlere’s Lost – A Memoir.
Against a stunning stage design – a large, segmented video screen cascading into a smaller, sparser setting of silver and glass squares – the energetic and physical Smith claimed the space from the outset with her portrayal of a suburban Calgary housewife and mother (Cathy) who walks through the loss of her only brother (David.)
Through a series of carefully-crafted vignettes, Cathy recounts her attempts to trace her brother’s (and his partner Sarah’s) final days aboard an aging sailboat.
From Calgary and Winnipeg to the tiny Atlantic Island of Madeira, and then on to Ireland and Scotland, Cathy walks the audience through a wave of feelings – denial, anger, hope, confusion and sorrow - as she pieces together the mystery of David’s disappearance.
En route, she discovers that, like her missing brother, she is also lost at sea, swamped by life, and then thrown overboard into an ocean of emotion as the days, weeks and months pass with no word on the couple’s fate.
Fleshing out a full cast of characters - family members, friends, associates and strangers – is no easy task. However Smith makes the transition seamless, giving the already gritty performance even greater depth and authenticity.
Audio and visual effects – including still and moving imagery, falling water, small props, samples of music and snippets of telephone conversation - are used sparingly, keeping the eyes and ears centre stage and inviting attendees to fill in the gaps with imagination.
Stirring and soulful, Lost – A Memoir is an honest, heartfelt and must-see account of one woman’s journey to find and reclaim her life. ~ Stephen Patrick Clare
Until November 6
www.neptunetheatre.com