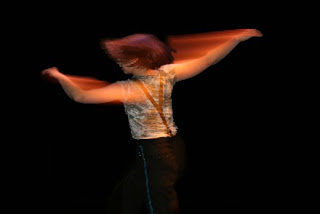 The intimate, minimalist setting of the Kinetic Studio showcased the talents of three Nova Scotian choreographers Saturday night. On Nov. 5th Sarah Cox, Sara Coffin and Jacinte Armstrong each preformed individual multimedia pieces, on a bare stage without costumes or elaborate props.
Cox’s is a work in-progress as she is this year’s “Exploration” and has the course of 9 months to change and improve her piece. Coffin’s was an excerpt from a larger work of hers scaled down and Armstrong’s performance is also in the developing stages while she is deciding what it means to her.
The performances, Northern Lights, Presence of Absence, and (we) are here, fused technology with movement. Cox and Armstrong projected images behind them, while Coffin actually used delayed live images as part of her choreography.
“…the jury’s still out on that one” said Sheilagh Hunt, artistic director of Kinetic Studio, when asked what she thought of technology being mixed with dance. She believes that such a heavy reliance on another person like a computer programmer could result in having to sacrifice creative vision.
“But it’s the way of the world right now,” says Hunt. Though a traditionalist she is excited to see what the performers will do with their final pieces and so are avid members of the Halifax dance community. ~ Sarah Jane Hasenhauer