Heart of the Rock 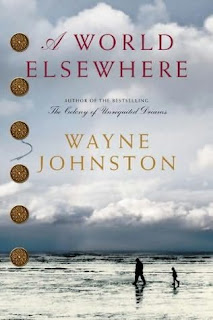 “We moved back to St. John’s in 1986,” recalls the multi-award winning author over coffee in Halifax, where he is touring his latest work A World Elsewhere.

“I found it extremely difficult to write with all of the distractions. Everywhere I went there were characters from my books walking down the streets.”

After three years of diversions, the fifty-something scribe and his wife packed their bags and headed west. Aside from his four years as a writer-in-residence at Hollins University in Roanoke, Virginia, Johnston has been content to create in The Big Smoke.

“In many ways Toronto has been an ideal place for me,” he notes. “I enjoy an anonymity there that I was unable to have back home. And, in some respects, the city lacks a definitive personality, which serves my process well.”

Noting that novelists need time and space above all, Johnston’s small studio is as non-descript as the Metropolis in which he resides.

“There are no windows, nothing on the walls, no distractions of any sort, and it is entirely sound proofed,” he shares about his basement bunker, where he works through the wee-small hours of the morning.

“It’s only when my wife gets up to go to work in the morning I know that it is time for me to pack it in.”

That isolationist mindset, he smiles, is a sure sign that his roots are showing.

“It’s a very Newfoundland thing isn’t it? I’ve always been a bit of a loner and I think a lot of us are that way. It’s in our blood.”

In hindsight, Johnston now believes that his exile from George Street afforded him a better perspective on his people.

“It’s funny how things can come into focus from a distance,” he shares, referring to the source of his masterworks, including The Colony of Unrequited Dreams and The Custodian of Paradise.

“I still get back to visit fairly often, but it’s better for my work that I take those experiences in small doses.”

Johnston has again drawn from Atlantic Canadian wells in A World Elsewhere, the witty and tender tale of two Princeton grads – one from St. John’s - who reconnect after many years apart.

"Landish (Druken, one of the book’s protagonists) is a composite of Newfoundlanders I have met through the years,” explains the author. “And even the way I’ve written about the city of St. John’s in this novel was pieced together from bits of memory.”

Praised for its stirring storyline and strong narrative arc, the book has become a national bestseller since its release in August and, more recently, was long-listed for the Scotiabank Giller Prize.

“The response has been wonderful,” he confides humbly. “I guess I’ve learned to take the accolades in stride. I mean, the work is what’s important here right?

“Sheesh,” he smiles sheepishly, acknowledging the innate modesty. “I guess you can take the boy off the Rock, but you can never quite take the Rock out of the boy.” ~ SPC