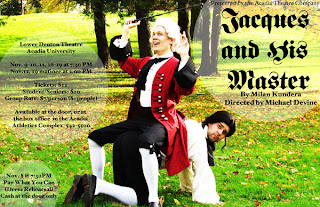 Jacques and His Master
The Theater Department at Acadia University in Wolfville, NS, kick-starts its 2011-2012 performing season with  Jacques and His Master, an entertaining and thought provoking road story by Milan Kundera. Kundera, author of The Unbearable Lightness of Being, sets his protagonists, the Master and his servant Jacques, in an 18th century landscape where fact is woven together with fiction and the past competes—literally—with the present for their attention. The romantic follies of the two men intertwine during their road trip, one in which they seem to be going backwards as much as forward. In the recounting of their amorous adventures they explore the nature of friendship, and the human need to find meaning in our actions even as we learn the uncertain nature of life and love. Director Michael Devine shares his thoughts on his passion for both his profession and the production.
AE: How long have you been involved with The Acadia Theatre Company?
MD: This is my 9th year at in the Theatre program at Acadia.
AE: What are the biggest challenges of your profession?
MD: The biggest challenge is time, because actually I have two professions. I’m a full time professor, but I’m also a full-time theatre artist. I work in Eastern Europe, directing shows and teaching actors, about five months a year; and during the school year I’m busily planning the time I spend in Europe. So time management becomes a priority.
AE: What are the rewards?
MD: The biggest rewards on the teaching side are watching students grow, into both artists and citizens. Training artists is also about training citizens—being more aware of your world than the average person, and being better equipped and more willing to do something about the issues which concern you.
AE: Why did you choose to produce Jacques and His Master for the fall production?
MD: I love the humour and wisdom of Czech literature in general and Milan Kundera in particular. As a people they have been through a lot—they were run over by the Nazis in World War II, then by the Soviets afterwards, until 1989. They have always survived on a mixture of clever humour and resilience. I believe Jacques and His Master, which is based on an early play by the French philosopher Denis Diderot, has a lot to offer contemporary Canadians. It asks some big questions—what’s the purpose of our existence? Can we change our fates?—in a highly comic and entertaining way. Are there any unique challenges in putting this particular piece together? One of the challenges in mounting this play is that it takes place in two worlds simultaneously, the past world of the fantasies of Jacques and of his master, and the present moment, where they exist in a kind of nether world devoid of landmarks and signposts. It’s not a play that should rely on realistic sets, so a director has to approach staging the two worlds carefully, so that each world is distinctive and recognizable and so that purpose of each world is clear to the audience. The language is a challenge, as well—it’s contemporary, but elevated. So we’ve been coaching the actors in a kind of mid-Atlantic, heightened Canadian diction that sounds natural.
AE: What can audiences expect to experience during the run?
MD: They will laugh a lot, for starters. I think they’ll be moved by the humanity of the play, by Kundera’s love of people and all their foibles. He’s a very generous writer in his world view. On a more surface level, the set and costumes are stunning and it’s a really beautiful play to look at!
AE: What are your thoughts on the current state of theatre in both Nova Scotia and the MD: Atlantic Region? This is a longer question for another time, but what I would say is that we’ve been stuck in a kind of colonial rut for a long time. I mean that there’s too much reverence for things British, and the British way of doing theatre, which is very text-based and traditional. Our theatre artists need to travel more, to Eastern Europe, to Asia, and see that there are many kinds of more adventurous ways of telling stories which can have an equal or greater impact on audiences. I get bored by realism, and by linear stories. Our audiences are smarter than that, and our artists should offer them more.
Jacques and His Master plays at the Lower Denton Theatre from Nov. 9-12 and 16-19. For tickets call the Acadia Box Office at (902) 542-5500.
www.acadia.theatre.ca