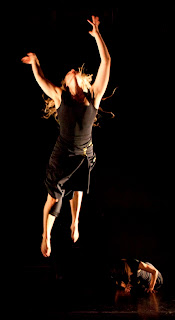 ﻿This weekend Kinetic Studio in Halifax presents Jacinte Armstrong, Sarah Cox and Sara Coffin as part of their Studio Series at Danspace-on-Grafton. AE caught up with Kinetic’s Chris Majka to talk about the performance, as well as other upcoming productions.
AE: How long has Kinetic Studio been in operation?
CM: Next year will be our 30th season! It originally started in 1982 under the name of the Modern Dance Committee of Dance Nova Scotia. It later changed its name to DAPA - Dance As a Performing Art - before becoming Kinetic Studio, a registered non-profit, charitable organization with its own board of directors, in 2003.
AE: What is Kinetic’s core mandate?
CM: The formal mandate says "Kinetic Studio is committed to developing, seeking support for, and carrying out projects and programs to nurture Nova Scotian professional dance artists and to stimulate the growth of dance as a professional performing art within the Maritime region." What this means is that we have developed a whole series of interlocking programs that help to stimulate that "growth of dance as a professional performing art" We produce a studio and main-stage performance series, which includes participating artists not only from Nova Scotia, but from throughout Atlantic Canada, and from across the country. We have also had ensembles and performers from New York and Nepal participate. We also stage a variety of professional development workshops for members of the dance community; a youth development project  - Taking Steps to Fly - which we co-produce with Dance Nova Scotia that allows young dancers to receive mentorship in producing and then presenting their first choreographies; Kinetic Explorations, a custom-tailored annual program to assist a professional choreographer in developing a work over the course of a season, which is then presented within our main-stage series; site-specific works, fundraisers, etc.
AE: What can audiences expect to experience on November 5&6?
CM: Exciting contemporary dance! Our presentations are showcases that usually include the work of at least three choreographers, so no matter what your taste in dance may be, there will certainly be something to please. The showcases are always an engaging cross-section of the work being created by contemporary Canadian choreographers. This November showcase highlights three very talented Nova Scotian choreographers, each with a distinctive vision of dance.
AE: Why is this an important cultural event for the city?
CM: Kinetic Studio is the premier showcase for contemporary dance that is being created by dance artists of this province. If you want to see the vision of dance as a creative discipline that is being developed by our dance artists - in all their diversity and imagination - Kinetic Studio is the place to experience it.
AE: What other events are scheduled for the 2011-2012 season?
CM: We have Studio showcases coming up on January 14-15, 2012 with Sarah Cox, Anne Davison, and Veronique MacKenzie; in March 24-25, 2012 with Kathleen Doherty, Sarah Cox, and another TBA dance artist. Taking Steps to Fly will run February 25 & 26, 2012. We also have a special Movement and Music series in collaboration with SuddenlyListen that runs November 28, 2011, February 6, 2012, and April 4, 2012. Other special events TBA.
AE: What are your thoughts on the current state of conteporary dance in both halifax and the Atlantic region?
CM: In the last 30 years there has been a lot of flux and change, up and down. Dance is a very demanding discipline, both in terms of how hard you have to constantly work as a performer to stay in physical shape, as well as develop your artistic abilities, and it can be demanding in terms of the technical infrastructure required for its professional presentation. There isn't a post-secondary institution where one can study dance in Atlantic Canada, so aspiring professionals need to go elsewhere to perfect their craft - and sometimes they stay, enticed by more opportunities than are available in this region. But many talented performers have returned to Nova Scotia after studies and experiences elsewhere, committed to creating and performing in this region. They bring with them new ideas and new energy. We still lack important technical infrastructure, one of the reasons many small dance and theatre groups in HRM have been collaborating on the Legacy Centre project - a plan to create a centre for the performing arts in Halifax. The challenges are still considerable, but there are some bright prospects on the future horizon.
www.kineticstudio.ca