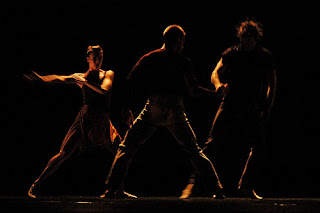 BJM Dance
November 2, 2011
Rebecca Cohn Auditorium, Halifax
The BJM Danse Montréal performance at the Rebecca Cohn Theatre was a night of outstanding technique, deep reflection, humour and thunderous applause.
On Wednesday Nov. 2nd, Live Art Dance presented BJM Danse’s North American premiere of Fuel as well as two other pieces, Locked up Laura and the show stealer, Rossini Cards.
“[It’s] a very technical company so their dancers are well-trained” said Paul Caskey, artistic director of Live Art Dance. He often hears audience members enraptured by the effortlessness of the dancers after the show. A reputation the company upheld throughout this performance.
“BJM has always been leading edge… push[ing] the boundaries of physical space,” says Stephen P. Clare, publisher of arts east. A concept the dancers explore throughout the three pieces but most forcefully in Fuel.
The first piece was feminine; it was “graceful” as Clare says. With the focus on technique it was an exquisitely executed piece of movement. The dancers’ physicality in this duet stole the stage as they used every inch of it with rolls, leaps, jumps and lifts. The intensity of the show, however, belongs to Fuel.
The lights fade after the intermission from the first piece and the audience is sunk into blackness and smoke. The music matches the bare setting of the dark room, the only lighting coming from a pile of industrial stage lights in the back corner.
“It’s something a bit darker, something sophisticated,” says Louis Robitaille, the artistic director of BJM. Robitaille says it’s a reflection of how the world is today, “It’s not a criticism, it’s just a reflection, a feeling.”
“It was very suspenseful” says Clare. “It’s in your face edgy.”
The dancers move with power and brutal force and deadpan faces. It’s eerie with their sharp, blunt movement and the urgency of the music.Fuel is visually stunning, “It’s a nice mélange of passion and precision,” says Clare but he believes“Rossini will steal the show.”
Ready to be plunged into a deep abyss of reflection on the state of the world, as in the last piece, the audience is deathly quiet while the curtains openafter intermission, revealing a line of identically dressed dancers with the same deadpanned looks as before.
After somberly removing his costume, a dancer suddenly jumps off stage and after a moment of suspense the tension breaks and the entire crowd breaks in to laughter and applause.
This sets the stage for the rest of Rossini Cards,filled with slapstick humour reminiscent of Charlie Chaplin movies. “It was just how the movement worked with the music and the expression on [the dancers] face’s,” says Heather Wilkinson, an audience member. “It had all different depths of humour” she says.
The show continued for the 52 minutes of this final piece, rewarded by frequent outbursts of laughter and at the end of the performancebrought the crowd to their feet for a standing ovation. ~ Sarah-Jane Kinsley Hasenauer