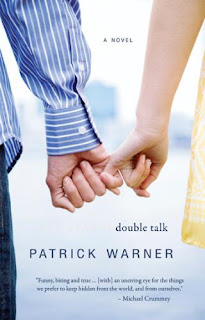 The inside jacket of Patrick Warner’s debut narrative, Double Talk, (Breakwater Books / 235 pp / $19.95) describes the work as a “coming-of-age novel, a love story and an examination of social class and its mysterious codes.”
Set in the scribe’s hometown of St. John’s, and spanning from the early 1980s to the mid 1990s, the bittersweet story follows the arc of a failed relationship between Violet Budd and Brian (Baby) Power, both aching to leave their former lives and loves behind.
“I wanted to see if I could create a rich and vivid context for the novel’s main characters,” shares the multi-award winning writer via email. “Not so much in an effort to explain them, but to give readers enough information so that they could draw their own conclusions about what happened and why.”
Warner likens the procedure to that of 16th century Italian portrait artist Giuseppe Arcimboldo.
“To make a likeness of a person he painted likenesses of fruits, vegetables, flowers, fish, or books and arranged these objects on the canvas in such a way that the whole assemblage was recognizable as the portrait subject. I think fictional characters are similar creations, only the parts used to compose the whole may be drawn from the author’s personality, from other people, or from fictional characters, with the truly original bits being the tissues that link all of these pieces together. “
The process of piecing the tome together, he explains, was vastly different from his previous collections of poetry.
“Poetry requires inhuman concentration for short periods of time. The novel requires stamina. If poetry is a sprint, the novel is the 10,000 meter steeplechase. They both, however, depend on moments of grace.”
Despite receiving numerous honours and nominations for his past efforts, Warner concedes to being of two minds on the matter of merit.
“I enjoyed the prize money, but I don’t really like the literary prize culture we are in at the moment. Literary prizes have too much influence on which books get widely read. The best publicity is still word of mouth.”
That said, the tome has been rightly-praised by the likes of fellow wordsmiths Michael Crummey, Lesley Vryenhoek and Chad Pelley, each influential and acclaimed authors themselves.
“Newfoundland does have a tremendous storytelling culture,” muses Warner. “But, when I think about it, what culture doesn’t? Stories and storytelling are how people make sense of their lives.” ~ SPC