Welcome to the Jungle! 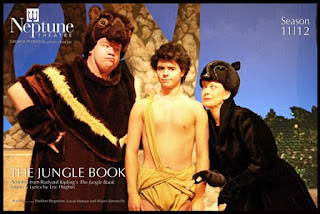 Those are just a few of the words that came to mind at the conclusion of Neptune Theatre’s holiday production of Rudyard Kipling’s classic coming-of-age tale The Jungle Book.
A mixed-crowd of youngsters, parents and grandparents were on hand to enjoy the 95-minute experience, a musical adaptation that is closer to the heart of Kipling’s original collection of short-stories (1894) than the more recent (1967), and better-known, Disney animated film.
As theatre-goers will witness, Neptune’s edition is equally extravagant; set design is stylish and superb, with an interactive backdrop awash in tribal greens and browns; costumes are clever and colourful; the sonic score is well-paced and properly-placed, and the vocal performances are by turns both tender and quick-witted. In particular, the “rapping-monkeys” number will leave audiences howling.
The real treat here, however, is the acting itself.
Sheldon Bergstrom is cast perfectly as the cuddly and loveable Baloo, Alison Somerville raises the stakes as the world-wise Bagheera, and Stephenos Christou is a very credible and convincing Shere Khan the Tiger.
The show-stealer, however, is Lucas Meeuse. As the leading man-cub Mowgli, the young thespian brought a raw power and physicality to the entire performance, sweeping the spotlight across the stage and leaving both cast and crowd spellbound, and, at times, speechless. Meeuse is the real-deal, and will do well to hold his own once he reaches Broadway or Soho. For now, however, he is in Halifax, and it is a joy to see this star rise before our very own eyes.
While this might not be typical Holiday Season fare, artistic director George Pothitos and his crew have succeeded in putting together a production that is fluid, festive and great fun for the entire family. ~ SPC
The Jungle Book until January 8, 2012
www.neptunetheatre.com