A World of Words 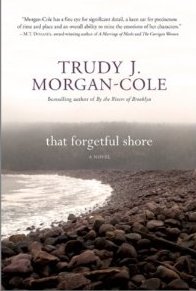 Author Trudy Morgan-Cole says that her latest work of fiction, That Forgetful Shore (Breakwater Books / 296 pp / $19.95), was inspired by a collection of old postcards from the early 20th century.
“They were found in an old house my family owns in Coley's Point,” shares the St. John’s scribe via email. “They belonged to my great-great-aunt Emma Morgan who was a teacher in various Newfoundland outports from about 1907-1917.”
Some of the exchanges between Emma and a female friend formed the basis of the new narrative; That Forgetful Shore is the touching and tender tale of Triffie and Kit, two young girls growing up in a tiny Newfoundland outport, and their correspondence by mail after one moved away.
“From the postcards, I had this very vague, very tantalizing sketch of a friendship between two women who were close enough to address their letters to each other using pet names, and who wrote of longing for each other's presence, and yet spent years seeing little of each other.
“Of course, I know almost nothing about the real women,” adds the author. “But that handful of old postcards was enough to get me imagining a lifelong friendship between two women who are similar in many ways, but who are divided by social class and opportunity.”
Pouring through the past was a crash-course in the province’s history as well.
“There were so many things happening during those years that made their way into the lives of these women,” explains Morgan-Cole. “The Labrador fishery, the First World War, the Great Depression, the changes in our education system and the establishment of Memorial College, the various Protestant religious revivals…
“And there were very few ways for women here to break out of the narrow role of fisherman's wife - and the opportunity to break out in that way was dependent on having money and luck and people who supported your ambitions.”
Much of her research was undertaken at the Centre for Newfoundland Studies at Memorial University.
“Reading old newspapers is one of my favourite forms of research. I love discovering what was considered "news" 100 years ago. It's often very different from what we consider news today.
“I loved writing about that world,” confides Morgan-Cole. “Writing fiction is the closest I can come to actually being there, and of course I hope that I can give readers a bit of that same experience.” ~ SPC