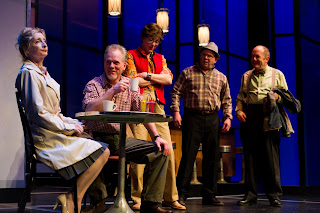 There were lots of laughs at the Neptune Theatre in Halifax last night, as Norm Foster’s mid-life coming-of-age comedy Mrs. Parliament’s Night Out played to an opening-night capacity crowd.


Against a sparse set of sliding panels - swathed in soft blue and gold – TV’s Sheila McCarthy (Little Mosque on the Prairie, Road to Avonlea) took centre-stage as the middle-aged, uber-conservative Canadian housewife Theresa Parliament.
When her blandish husband forgets their 32nd wedding anniversary, the protagonist experiences an identity crisis of sorts, blindly leaping into an array of new activities, including singing and dance lessons, photography, bowling, boxing, archery and wine-tasting soirees - all in search of a new self.

After inadvertently finding herself at a 12-step meeting, she meets Steve, a recovering addict, and their connection is immediate. Exclaiming “I want to be noticed” – and with Steve’s encouragement - Parliament slowly opens up from her life-long, self-imposed shell, often with side-splitting results.

There is a lot to like here; the storyline is strong, with a smooth and seamless narrative arc that engages the audience from start to finish. And Foster’s dialogue is fresh, fluid, and filled with witty and well-timed one-liners.

If the production has a soft-spot, it is only with mood and tone. Though billed as a comedy, a little more emotional depth would have stirred the story well. The tender moments were few, and those that did arise were awkwardly whisked away with the wave of a wisecrack.

Still, the performance played-well with the mostly female, baby-boomer crowd - many of who were laughing along while nodding their noggins knowingly. ~SPC