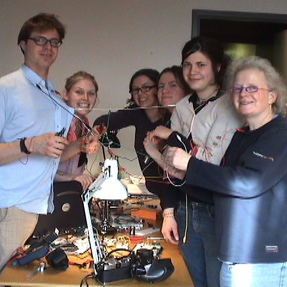 By Jen Powley
“We actually had to fundraise to offer them,” says James MacSwain, poet and editor, reminiscing about the inaugural offering of the Media Arts Scholarships.
MacSwain co-founded the Media Arts Scholarship program at the Centre for Art Tapes in 1988 as an effort to offer artists the opportunity to explore electronic and video production.
“It is just so expensive to work in video, unless you have a big government grant,” explains MacSwain, adding that unless you are already established as an artist, those grants aren’t easily forthcoming.
Centre personnel no longer have to fundraise directly to offer the New Media Scholarship Program, as the program is now funded through both the Nova Scotia Department of Communities, Culture and Heritage and the Canada Council for the Arts.
The New Media Scholarship Program offers ten participants five intensive months of art making. An independent selection team picks 10 candidates based on a number of criteria, including how well-defined the projects are, and whether the Centre can actually support the endeavour. “Applications to the program exceed capacity fourfold,” says CFAT Director Mireille Bourgeois.
Once chosen, “Schollies” engage in a series of workshops to learn technical skills such as storyboarding, videography, editing and lighting. They are teamed with a mentor, who acts as a sounding board for their ideas and helps keep them on track.
Program mentors and CFAT staff work to ensure each project conforms to the vision of the scholars. Though many people are  involved in producing the new art works, Bourgeois notes that “the projects remain the work of the scholar.”
Only artists working in “New Media” for the first time are considered for the program. This doesn’t mean that all participants are new artists, as some might be established artists that normally work in another medium. The program gives them the opportunity to extend their portfolio and to experiment with new forms.
Though she graduated from the Nova Scotia College of Art and Design in the spring of 2011, Karen Hawes had never worked in either video or photography. She even hesitates to call herself an artist. Hawes has two friends who had previously done work through the CFAT scholarship program, and after the program was mentioned a couple of times in her classes, she decided to apply. She had an idea. Although she currently is still in the midst of completing her video project for presentation at this year’s “Out Of The Centre” screening - scheduled for February 25 at Neptune’s Studio Theatre. Hawes is impressed by the program’s collaborative nature. “There is a real sense of community,” shares Hawes. “Not only do you work with your mentor, but all participants get together and you get feedback from all sorts of perspectives. It’s amazing.”
The scholarship program benefits both the participants and the CFAT staff, who become better familiarized with current practices and technical applications. “It pushes us to explore ways of doing things that we never would have thought of,” says CFAT technical coordinator Tom Elliott. That expertise is then passed on to the next year’s participants.
The 2012 scholarship presentation will be held at the Neptune Studio Theatre in Halifax on Saturday, February 25. For more information please visit www.centreforarttapes.ca