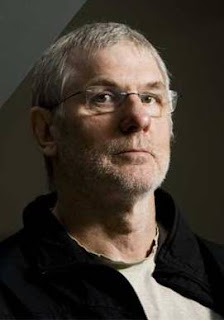 Multi-award winning author David Adams Richards needs no introduction. The New Brunswick native has layered the Canadian literary landscape with a litany of contemporary classics, including Mercy Among the Children, The Lost Highway and his latest efforts, Incidents in the life of Markus Paul and Facing the Hunter; Reflections on a Misunderstood Way of Life.
What do you regard as the lowest depth of misery?
I haven't reached it yet and hope I never will
Where would you like to live?
Canada and Spain are my two favourite countries - cities I like are London and New York
What is your idea of earthly happiness?
The love of my wife and children—surprise, surprise
To what faults do you feel most indulgent?
Watching bad movies, trying to buy too many Harley's
Who are your favorite heroes of fiction?
Pierre in War and Peace, but also Prince Mushkin in The Idiot, and The Mayor of Casterbridge, Phillip in Of Human Bondage (a really fine book),  Catherine in Wuthering Heights, Princess Marie in War and Peace, Sonya in Crime and Punishment, and I might say both Lyle and Autumn in Mercy Among the Children
Who are your favorite characters in history?
Winston Churchill, Marshall Zhukov, Joan of Arc, Michelangelo, Hannibal,  Rembrandt, Sam Johnson, Vincent Van Gogh, Saint Francis, Stalin (well he is who he is), Rommel, Elizabeth the 1st, Byron, Keats, Mary Shelley, Emile Bronte, Scott Fitzgerald etc---too too many to mention
Who are your favorite heroines in real life?
A woman who left a poverty stricken widow at 42 brought up 9 children (that is my mother in law), the Canadian women's hockey team, Lisa from Ice Road Truckers, Mother Theresa, Margaret Thatcher, the widows and mothers of the disappeared, the woman who became the one constable in a Mexican drug town, the Sydney Police Woman who sat beside the girl who had a bomb attached to her, holding her hand for two hours--you don't get much braver than that
Who are your favorite heroines of fiction?
Catherine in Wuthering Heights, Sonya from Crime and Punishment, Princess Marie from War and Peace, Autumn in Mercy Among the Children
Your favorite painter?
Rembrandt (many others--Vincent too)
Your favorite musician?
Beethoven (many others--right up to and including Fred Eaglesmith)
The quality you most admire in a man?
Integrity
The quality you most admire in a woman?
Integrity
Your favorite virtue?
As above
Your favorite occupation?
The only one I know
Who would you have liked to be?
Whoever it is, I pity them