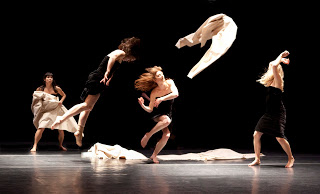 Wooh … exclaimed many times from my lips - I could not hide my inner excitement during the world premiere performance of Canvas 5X5. Mocean Dance’s Jacinte Armstrong, Rhonda Baker, Susanne Chui and Ruth-Ellen Kroll-Jackson filled place and time with captivating imagery, technical prowess and emotion, at times humorous. Choreographer Tedd Robinson’s imagination and artistry was channelled through the movement of canvasses. The four local dancers at times impressively balanced frames on heads, elbows, faces while garbing oversized muslin sheets that at any moment would cause most humans to trip and fall. The contrast between the dancers’ black tube dresses and white, over-sized sheets created visual art as black and white were thrown in every direction under the effective use of shimmering spotlights. Robinson’s appreciation for Celtic and Japanese culture was wholeheartedly revealed through upbeat music or calming airs, step dances, lively counts and four fleeting geishas floating across the stage.

Live Art Dance’s evening at the Dunn began with renowned Claudia Moore who is soon approaching her 60th birthday. And yet her athleticism and endurance revealed in Dances in a Small Room suggested otherwise. Choreographed by James Kudelka and Robinson, Moore and Dan Wild engaged in an emotional tug of war in the most technically intricate routine. The majority of their duet had no musical accompaniment which added to the heightened passion, anger, confusion and peace expressed in their breath and bodies. The chemistry between Moore and Wild was so sincere and made for a flawless performance.