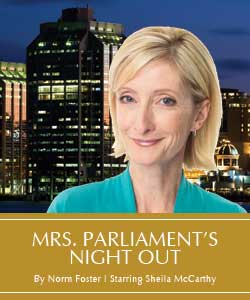 The world premiere of Norm Foster’s Mrs. Parliament’s Night Out (starring Sheila McCarthy) will debut Tuesday at Neptune Theatre in Halifax.
The play’s director, Miles Potter, has been a part of the Canadian theatrical scene for at least 40 years. He has directed productions in almost every major Canadian venue, taught at the National Theatre School, Dalhousie University and other institutions and played various roles for companies like Theatre Passe Muraille and the Stratford Festival. Arts East recently caught up with Potter to get his take on Neptune’s latest play.
AE: What drew you to directing Mrs. Parliament’s Night Out?
MP: I’ve done two Norm Fosters before and this is a new play. I love doing new plays. I love working on scripts. I love helping make them better. It’s always a pleasure to work on a new play. It’s the same reason the theatre wants to put it on. I was attracted to do a comedy in February. It’s a lovely time of year to do a piece like this. And it’s always a pleasure to work on a Norm Foster script.
AE: How does directing Mrs. Parliament’s Night Out compare with the many other plays you’ve directed?
MP: It compares very well. You take the same approach to everything, whether it’s a Norm Foster comedy or a Shakespeare. You figure out what the play is trying to say - what the playwright is trying to transmit to his audience. And then you help the actors do that. Every play has something to say. Just because it’s a very funny comedy doesn’t mean that it doesn’t have something to say. So, what I really enjoy is finding out what that is, finding out what things in the script support that and making it clear to the audience. I do find you can make people laugh, but if they feel there is also something else going on, they feel better about having committed their time and attention, if it’s not just a laugh a minute [laughs].
AE: What can audience members expect from Mrs. Parliament’s Night Out’s?
MP: It is about trying to make sure that we are aware of what we’re doing with our lives and that we’re not running on automatic pilot.
AE: Is this your directorial debut at Neptune Theatre?
MP: It’s the first play in a long time. I was here quite a long time ago, before any of this fancy renovation happened, for “B” Movie – The Play [1988-89 season]. And then I had another show that came through, which was really part of a tour, of Search for Signs of Intelligent Life in the Universe. So it’s my third play here, but it’s been so long, it’s all brand new to me.
AE: Auditions were held in November, rehearsals started January 3rd and opening night is this week – is this intense time frame typical in the theatrical world?
MP: Yes that’s very typical. You have to get the actors booked ahead of time, so they can schedule themselves. And we wanted to get the best people we could get, so they wanted me to come out and make sure I could see everybody that needed to be seen in Halifax. Between then and the start of rehearsals, I spent a lot of time with the designer, Patrick Clarke - but not actual time with him because he’s very busy and I was different places – a lot of this is done now via e-mail and the Internet. But we designed the play; he sent different pictures and models. So by the time we arrived at the beginning of rehearsals, we knew exactly what we were going to be doing … Theatre people are excellent schedulers.
AE: When you direct a play, such as this one, does it take over all of your thoughts?
MP: It stays with me when I’m working. Yes, it’s there a lot. It’s sort of like, to use a computer analogy, the program is running in the background all the time. It’s not necessarily up front in my brain when I’m not at work, but you never know what’s going to happen. You might suddenly have an idea and not quite know where it came from, but it was some outside influence that came in. It stays with you because it’s intense – you’re doing three weeks of solid, six-day-a-week work (12 hour days) and then you’re finished. So, you really have to focus on it while you’re doing it.
AE: What are your plans for after Mrs. Parliament’s Night Out’s?
MP: My immediate plan is to go home and get reacquainted with my son and my wife. In March I’m going to go do God of Carnage at the Manitoba Theatre Centre. After that, I’m going to do Macbeth at the Barn on the Beach Shakespeare Festival in Vancouver.
Mrs. Parliament’s Night Out ~ January 24 – February 19, 2012.
www.neptunetheatre.com