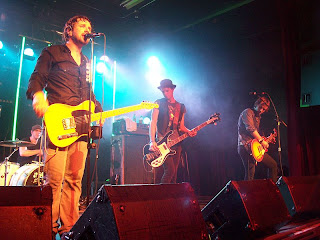 The Trews
The Capital Exhibit Centre, Fredericton
January 28, 2012
Friday morning, the East Coast Music Association (ECMA) revealed its nominations for this year’s annual awards week (Moncton, April 11-15). The Trews received five nominations, including Entertainer of the Year and Song of the Year (“Hope & Run”). Thirty-six hours later, Justin Cook witnessed the Antigonish-based rock band play to a sold-out Fredericton crowd.
The music was loud and the crowd aspired to match it. Once The Trews took the stage, there wasn’t a moment of silence for the rest of the night. Pauses between songs were filled with piercing screams.
“Don’t drink your problems away. Face them, and then drink,” Trews front man Colin MacDonald said near the start of their set. The band must have faced their problems because they showed up with beers in hand and glassy eyes too match. Any alcohol they had in their system didn’t affect their playing though. The band hit every note.
Bassist Jack Syperek seemed comatose, only coming to life when he had to play. He moved lethargically throughout the show, but during the final encore he suddenly went wild and jumped onto the floor. MacDonald certainly knows how to work a crowd. His every gesture accentuated the music’s intensity.
The Trews truly pulled out all the stops, playing a two-hour set with all the hits you’d expect, such as “Not Ready to Go”, “So She’s Leaving” and “Hold Me in Your Arms”. The band rocked a few choice album cuts too, such as a rousing rendition of “Gun Control”. It was the perfect setlist for any ardent Trews fan.
The show surprisingly started on time at 9:00, with the Poor Young Things playing a 45 minute set to half-hearted applause. Still, their catchy riffs and one-liner choruses were a perfect warm-up for the headliners.
The Trews had sold out the Fredericton Playhouse and Nicky Zee’s bar before, but the Capital Exhibit Centre is a much larger venue. However, the band proved their popularity once again. In fact, people were sent away because there were no tickets left – pretty impressive considering there weren’t any posters around the city. ~ Justin Cook
Photo: Lildreamer22