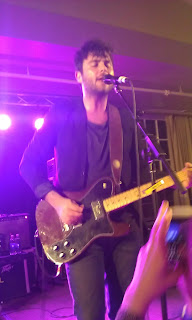 The Arkells
UNB Student Union Building, Fredericton
February 1, 2012
The best way to describe the Arkells show would be to call it intimate. In fact, I had to periodically duck so frontman Max Kerman’s guitar didn’t smash into my head. All the band members, except the drummer, were within reach of those in the front row.
The entire band was energetic and at their best. Although there was probably less than 200 people there, the band seem pleased as the majority of the crowd mouthed the lyrics to the songs.
The setlist was solid. The band played a few songs, such as “Tragic Flaw” and “John Lennon” off their debut, Jackson Square. They played every song off new album Michigan Left, except album highlight “Coffee”.
Although the band was in excellent form, the sound wasn’t the greatest. Maybe it’s a limitation of the sound system in the small venue, but the music wasn’t as clear or crisp as it should’ve been. This was especially prominent during the opening band, The Darcys’, set.
The Darcys seemed like nice guys. They greeted fans after the show, but their music translated into a sludgy murk from the amps. This makes it hard to judge whether the band had chops or not. Members of the band later accompanied the Arkells on two songs, “Agent Zero,” and a cover of “You Make My Dreams Come True” by Hall and Oates.
The lighter songs of the Arkells’ new album benefitted from the live atmosphere, as they had everybody moving. Even though they can’t really be called hits, there was an electric feeling in the air when the band rocketed into songs like “Oh, The Boss Is Coming” and “The Ballad of Hugo Chavez”.
Even though the Arkells might not be able to draw thousands in Fredericton, the Ontario band definitely has a passionate cult following here.  ~ Justin Cook
Before leaving Atlantic Canada, the Arkells will perform tonight at The Grawood (Halifax) and tomorrow night at The Wave (Charlottetown).  http://arkells.ca/