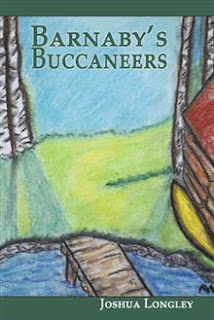 After imagining a fictional summer camp with his young niece, Josh Longley began to write a YA novel featuring Madeleine as the main character. With two months of intense composing and three months of editing, Barnaby’s Buccaneers was published just in time for a Christmas surprise. Last night, Longley and niece Madeleine hosted a book launch at Local Jo Café. Arts East caught up with the new, Halifax author a few days before the event.
AE: What is Barnaby’s Buccaneers about?
JL: It’s a book that follows four 10-year-olds at Camp Barnaby in south-western Nova Scotia. They quickly learn that the evil McGlargle group is trying to take over the island on which the camp sits to build a resort. The official categorization [reading level] is 9-14 year olds, but my niece who’s eight had no trouble with it.
AE: Where did the idea for Barnaby’s come from?
JL: I was in the car with my niece Madeleine, while my sister was driving, and we just started making up a story in the back seat. It involved Backyard Lake and the McGlargle group came out of that. Then, a week or so later I sent Madeleine an e-mail where I had written down some of the stuff we’d talked about and fleshed it out a bit. And that became a book.
AE: What was Madeleine’s reaction when you surprised her with the book for Christmas?
JL: She seemed pretty stunned. I also gave her the original artwork from the cover of the book [created by local artist Nicole Moore]. When she opened that, she asked, “Is this really, really the cover? Is this really, really the original?” So she seemed pretty pleased with that. I suppose Part Three of the present was getting to be on the radio with Don Connolly who she listens to every single day. I was excited for her.
AE: How did you adjust to writing almost every day while maintaining your day job?
JL: It coincided with me starting a walking regiment. So, I would go for a walk and think about what I was going to write. Then, I would stop off at the end of my walk, mostly at Uncommon Grounds on South Park Street or sometimes Durty Nelly’s, and write anywhere from six to 20 pages, depending on how much my muse was flowing.
AE: What were your literary experiences before writing Barnaby’s Buccaneers?
JL: Well, I’m an avid reader with absolutely no writing experience whatsoever.
AE: Do any of the book’s characters reflect your personality?
JL: Not to sound pretentious at all, but it’s been said by many people that, for any writer, you’re always writing about yourself. I’m sure there are parts of myself in the Madeleine character. There’s the bookish, technology geek, Oliver; Sam the kayaker (I did quite a bit of kayaking and canoeing when I was younger); I effectively put all the whimsy and silliness into Emma…
AE: What made you pursue this hybrid form of publishing?
JL: It’s published through a company called iUniverse. So it was publishing for a fee, but at the same time, the book was required to be accepted. It’s not like CreateSpace for Amazon where you just write something and send it to them and they publish it. There’s line editing involved, content editing, marketing editing… If I had to do it all over again, and had the time, I might have pursued traditional publishing. But my understanding is traditional publishing can take anywhere from eight months to a year to go from manuscript to finished product. I had a time constraint due to Christmas.
AE: Was it hard to write this novel?
JL: The writing was surprisingly easy. The editing process was pretty horrendous – it was very boring.
AE: For those who have dreamt of writing their first book, what advice do you give?
JL: Sit down and write it! Seriously, I do know a lot of people who have tried to write books and I almost get the feeling, based on my experience, that they’re possibly over-thinking it. Whereas, when I decided to write this book, I just literally sat down and wrote it. I had no outline…I had nothing other than a setting.
http://www.barnabysbuccaneers.com/