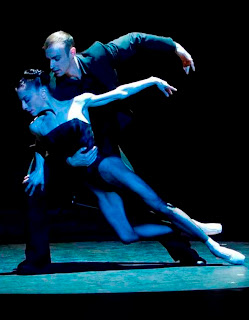 La La La Human Steps
Rebecca Cohn Auditorium, Halifax
February 12, 2012
The lobby of the Rebecca Cohn Auditorium was abuzz with anticipation last night, as local dance-lovers eagerly awaited the Atlantic Canadian debut of La La La Human Steps.
Taking the stage at 8pm, Paul Caskey, Artistic Director of Halifax-based Live Art Dance Productions addressed the capacity crowd, welcoming “one of the world’s most amazing dance companies”, and acknowledging the efforts of the in-house technical team for setting the elaborate stage in just 48 hours.
Inspired by Purcell’s Dido and Aeneas and Gluck’s Orpheus and Eurydice, LLLHS’s founder and director Édouard Lock designed the 85-minute New Work to detail the death of love.
Encouraging the audience “to both reinvent and rediscover the body and its dance”, the troupe’s eleven dancers flung their bodies across the floor in fury and frenzy, only pausing long enough to allow sharp slivers of emotion to emerge from the shadows of sensuality. Like Lock’s past pieces, New Work is an inspired and intense blur of idea, feeling and raw physicality - a sexy, stylish fusion of swayed hips, twirls, leaps, lifts, hand-slaps and toe-taps.
Gavin Bryars’ original score - performed by a live quartet of piano, viola, cello and saxophone - succeeded at setting the work’s mood and tone.
As a viewer, I found myself experiencing the show in three ways; trying to understand the story weaved in Lock’s mind and how he might be encouraging the audience to design their own tale; taking in the intricate choreography (designed to the millisecond); and savouring the sheer physical power and beauty of emotion in motion.
New Work was a spectacular first foray to Halifax for La La La Human Steps - and one that calls for the troupe to perform a sooner-rather-than-later encore.