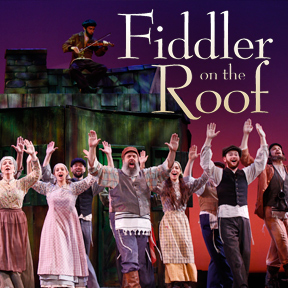 Fiddler on the Roof
The Playhouse Fredericton, NB
February 8, 2012
by Laurie Glenn Norris (Lower Kingsclear, NB)
Fiddler on the Roof, the story of Jewish village life against the backdrop of Tsarist Russia in 1905, is one of the most celebrated musicals in American theatre. Since its long-running Broadway début in 1964, when it garnered nine Tony Awards, Fiddler  has played to international sell-out audiences, been made into a motion picture, and has become a favourite with high school and local theatre productions all over the world.
Currently Fiddler is in the midst of a North American tour, with six stops in Atlantic Canada. In , it appeared as part of the Playhouse’s Spotlight Series. This production, complete with Jerome Robbins’s original Broadway direction and choreography, is a visual and auditory treat from beginning to end.
The enduring appeal of Fiddler lies in its universal themes of love, family, sacrifice and inevitable change. Tevye, played to loveable perfection by understudy David Springstead, is the hub around which all the action turns. We share his hopes for his daughters, his exasperation with his sharp-tongued wife Golde, his fear for his village and his confusion as the traditions he holds so dear keep crumbling around him.
And the music – it’s the music of Fiddler that we all love the most. The prologue, with the entire cast belting out “Tradition” got toes tapping throughout the Playhouse and I’m sure I wasn’t the only one lip-synching the words to “If I Were a Rich Man” and “Sunrise, Sunset.” Sometimes, just like Tevye, we too like the traditional, and for three hours and forty minutes last night at the Fredericton Playhouse, I had the luxury of indulging in a timeless classic. Some things should never change.
Fiddler on the Roof continues its North American tour with shows in Halifax on February 10 & 11. http://www.fiddlerontour.com/