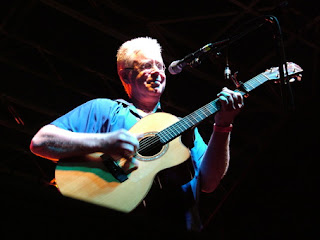 Bruce Cockburn
The Playhouse, Fredericton
February 17, 2012
By Mark Loggie
There’s really no better way to start your Friday night than by having your mind blown by folk music icon Bruce Cockburn. Playing to a sold out Fredericton Playhouse, the Canadian Music Hall of Famer put on a one man show that seamlessly mixed jazz, folk, rock and well-aged hippy wisdom.
Despite the tired cynical attitude heard in his curt anecdotes, there’s a passion in his songs that bring his low gruff voice alive. Age has done nothing to stop classic hits like Lovers in a Dangerous Time from sounding just as powerful as they did back in the day. His poetry is a torrent of imagery and metaphor, delivered deliberately as he stands there dressed in combat boots and a black duster like some long retired gunslinger. His guitar ability deserves to be called virtuosic. The man really is a living legend.
Seeing him once has made me a fan, and I’d urge anyone with even a slight appreciation for acoustic guitar music to see him live.