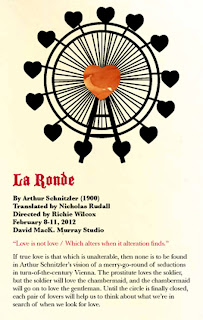 La Ronde
David Mack Murray Theatre
Dalhousie Arts Centre, Halifax
February 7, 2012
by Jen Powley
When Arthur Schnitzler wrote La Ronde in 1897, he didn’t intend for it to be performed. (It was written as a play, but according to Dalhousie German Professor Hans-Gunther Schwarz, the playwright didn’t want it to be performed “until the world was ready for it” which he thought would be at least 200 years). It was written as a series of dialogues leading up to and after sex between 10 interlaced couples. Well we assume it was sex – all Schnitzler put in the script were ellipses… Dal Theatre didn’t leave any ellipses.
Despite Schnitzler’s warning, Dal Theatre has chosen to perform La Ronde only 116 years later. Maybe the producer thinks society is ready for a tale of sex and partner swapping. He isn’t the first to think society is ready for it – La Ronde was performed under the name Reigen in both Austria and Germany in the 1920s.
Introducing each dialogue, the entire cast struts on stage in a theatre dripping in red and black. Dressed in nothing but enticing lingerie or other erotica, the scene drives home Schnitzler’s ultimate point – all humans, regardless of their social position, ultimately want two things – sex and love.  The characters getting dressed for their roles in full sight of the audience sharpens this point.
The sex aspect of Schnitzler’s diagnosis of the human condition is fully explored during the performance. There is sex between a prostitute and a soldier, between the soldier and a maid, between the maid and her boss, then between the boss and his mistress, between the mistress and her husband, between the husband and a gigolo, between the gigolo and an artist, between the artist and an actress, between the actress and the Countess and finally between the Countess and that same prostitute. There was sex in every position and between every combination of people. The stage went dark when the sex was about to begin (Schnitzler would have approved) and then a quick flash of red light would reveal the characters in a series of sexual poses (Dan Savage of Savage Love would approve).
The love aspect of Schnitzler’s diagnosis left the audience with questions (which may have been his intent). One is left to wonder: Why do we search for love? How is love related to sex if it is at all?
La Ronde until February 11th.
www.theatre.dal.ca