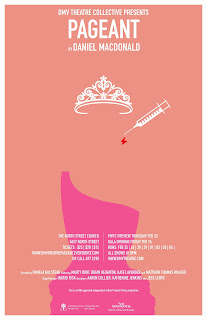 Pamela Halstead has been a part of Canada’s evolving theatre scene for over 20 years. The now Artistic Director ofLunchbox Theatre in Calgary returns to Halifax to direct DMV Theatre’s production of Pageant. Recently, AE caught up with Halstead to discuss Daniel MacDonald’s play, her eclectic experiences and her views on Atlantic Canada’s theatre scene.

AE: How long have you been involved in theatre?
PH: I studied theatre at Dalhousie in the 80's and have worked professionally most years since then - as an actor, director, teacher and arts administrator.
AE: What are the biggest challenges of your profession?
PH: The biggest challenge always remains financial - whether as an individual artist or if you are running a production company. Theatre, in most instances, cannot generate enough revenue from ticket sales to cover expenses so you rely on government, sponsorships and donors to make up the difference. And as an artist you are always looking for work and hoping that the producing theatres generate enough revenues that the shows continue to happen and that you can piece together enough gigs to make ends meet.
AE: What are the rewards?
PH: When you create theatre that moves or inspires people it is very satisfying. To know that the work you are doing makes a difference. And with DMV Theatre, where we purposely choose challenging topics, it is amazing to be part of something that generates such interesting dialogue about the society in which we live.
AE: How long have you been involved with DMV?
PH: Since its inception in late 2006. Our first production was “How I Learned to Drive” in early 2007 and I have been involved in all five of the productions we have produced thus far.
AE: What made you choose “Pageant”?
PH: I had worked on the original production of “Pageant” as Production Dramaturg in 2003 at Alberta Theatre Projects in Calgary. Danny Macdonald's writing is sharp and funny and it takes a subject matter - our obsession with beauty - and deals with it in a much unexpected way. I have always kept the script in the back of my mind and knew that at some point I would direct it. And it is a great fit for DMV and an excellent compliment to last year's “The Ugly One”.
AE: Are there any unique challenges in putting this particular piece together?
PH: There are two big challenges - there is a good chunk of a Chevy Malibu dismantled on stage in Act Two and it can be challenging to find the specific parts, in the right make and model that are needed. There is also a lot of physical action that has to be very specifically timed in order to work and all this stage business is combined with the text, so it has to be very carefully choreographed.
AE: What can audiences expect to experience during the run?
PH: Audiences can expect a very dark, funny, thought provoking piece of theatre written by a fantastic Canadian playwright, Daniel Macdonald, featuring amazing performances from Marty Burt, Brian Heighton, Kate Lavender and Matthew Thomas Walker.
AE: What are your thoughts on the current state of theatre in Halifax?
PH: I have been very excited to see the growth of the independent theatre scene in Halifax over the last ten years. There is so much interesting stuff happening with companies like Zuppa Circus, OneLight, 2b Theatre, Forerunner Playwrights Co-op and now with what has been happening at the Plutonium Playhouse. It is a very exciting time for theatre in Halifax.
AE: What are your thoughts on the current state of theatre in Atlantic Canada?
PH: I think there are four very distinctive theatrical communities in Atlantic Canada. The Newfoundland community has really flourished and come into its proper place of recognition nationally in the last decade. And Prince Edward Island always amazes me with its balance between the Confederation Centre for the Arts and the amazing number of other theatrical offerings available there especially in the summer - on the professional, semi professional and community theatre level. Nova Scotia has for many, many years had a very busy summer season, and now with the addition of the numerous independent theatre companies complimenting what is happening at Neptune Theatre, we are seeing very dynamic offerings available all year round. My experience in New Brunswick is that Francophone theatre has its own vibrant community and English theatre can feel a little left behind at times. It is a small community and more isolated. You have Live Bait Theatre in Sackville which often seems more a part of the Nova Scotia community as it is so close geographically. The only other professional English company in NB is Theatre New Brunswick which has gone through a number of significant changes in the last ten years. It has had to reinvent its place in the ecology of the provincial arts scene since eliminating its province-wide touring that for some many decades was the mainstay of its identity. Overall, for the size of our population and the resources available we have a very vibrant theatre scene in Atlantic Canada. I have a friend though whose artistic dream is that there is enough resources here and work being created and produced that all the incredible artists from this region who have felt they had to leave to pursue careers elsewhere could come back to Atlantic Canada. He figures the pressure cooker of talent, if we were all together here and creating would be something to behold! Perhaps with all this ship building money coming...!!
Pageant runs February 23 - March 4, 2012, at the North Street Church in Halifax.
www.eventful.com/halifax/events/dmv-theatre-presents-pageant-daniel-macdonald-/E0-001-045955993-6