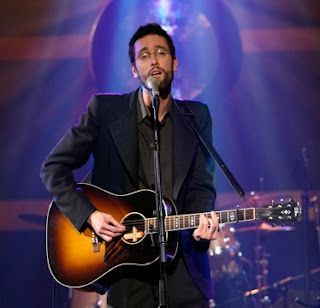 It may have been frigid in Fredericton this past weekend, but the 3-day Shivering Songs Festival kept the New Brunswick Capital City warm with the sounds of David Myles, Hot Toddy, Catherine MacLellan, Postdata and David Adams Richards. AE’s Cedric Noel gives us the lowdown on the highlights.
Songwriters and Storytellers
In the grandeur of Wilmot Church in downtown Fredericton, a large crowd sat themselves upon aging pews to take in the songwriters and storytellers matinee. On stage were David Myles, Mike O'Neill, Andrew Sisk, and Catherine MacLellan, accompanied by her right-hand man Chris Gauthier - each of whom told a story, though sometimes unrelated to the piece they were about to perform. Myles, who was his usual chipper self, played three new songs. MacLellan and Gauthier had the most energy of the afternoon, though O'Neill and Sisk were the most entertaining of the four songwriters, amusing the crowd with funny stories before entering into rich melodies. Equally enthralling was renowned New Brunswick writer David Adams Richards, who read to parts of his classic novel Friends of Meager Fortune. The author transported the audience into the deep woods of New Brunswick, and they held on to every word he said. After Adams, the musicians finished up the afternoon with two songs each before exiting the stage to a standing ovation.
Mark Kozelek & Postdata
Paul Murphy is best known as the front-man of Halifax band Wintersleep. But on Saturday night, under an ominous light and before a capacity crowd at Wilmot Church, he took the stage with only keyboards and synthesizers under the guise of his solo project Postdata. From start to finish the crowd was left stunned and speechless by Murphy’s emotion-evoking voice. That, accented by his often gut-wrenching lyrics, made for the most emotional performance of the festival. It was over far-too quickly, before Mark Kozelek (a.k.a. Sun Kil Moon) took the stage as the headlining act. Sitting in a chair with his legs crossed, annoyed that Air Canada had lost his guitar (which was retrieved before the show), Kozelek's stage presence and between-song banter were sub-par, and even rude at times, resulting in a few people parting the venue. He did, however, dazzle the audience with his amazing guitar techniques. Kozelek left the stage after a 50-minute set, and although the crowd cheered for an encore, did not return.
http://www.shiveringsongs.com/