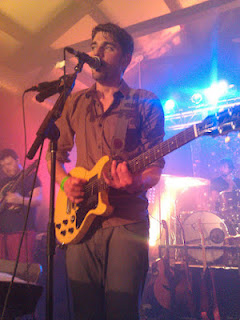 The emotional highs and lows of Hey Rosetta!’s live show provide an almost cathartic experience. The band enthralled the crowd from the moment they took the stage, until their final exit.

Unfortunately, opening band Heavy Meadows didn’t have the same impact - a forgettable performance, with only the spastic movements of guitarist Seth Timothy and the killer bass grooves of Chris Pennell worth noting.

But Hey Rosetta! didn’t disappoint. Some bands seem like they’re just going through the motions but this group isn’t one of them. They played with a genuine enthusiasm, flashing appreciative smiles at the crowd.

Watching Romesh Thavanathan switch from cello, to guitar and various other instruments is an impressive sight - even more-so when they take place within the same song.

Hey Rosetta!’s sound as almost as powerful as an orchestra’s, despite only having six members. All band members, with the exception of the drummer, occasionally took on a duty besides their primary instrument. It'd be impossible to bring the large sound of the studio recordings to a live setting without doing this.

There was a mechanism on the right of the stage that sprayed paper leaves over the entire crowd on two occasions.

The crowd helped spice up the show too. A sea of sparklers emerged in the front midway through the concert.

One enterprising fan brought a ball of yarn that was thrown around like a beach ball during an explosive performance of “Sum (Nous Sommes)”. It landed on the stage multiple times, before being dragged back onto the floor. Everyone in the first several rows was eventually blanketed with red yarn.