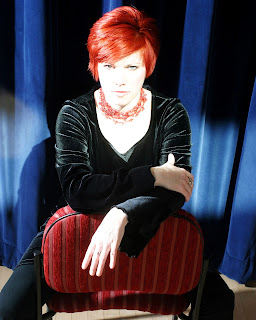 Only Janice Jackson would dare to undertake a musical performance that features "spring coils, bike chains, strap locks, and oriental balls, all wrapped in ephemeral dream states." Still, the Halifax diva and her musical compatriots - Geordie Haley, Bob Bauer and Lukas Pearse - will be doing as such at the Dalhousie Art Gallery this Sunday night at 8pm. AE recently spoke with the soprano extraordinaire about Irrevocably Blue, a nu-music performance inspired by the work of visual artist Douglas Walker.
AE: Why the title Irrevocably Blue?
JJ: A prominent color in Walker's work is blue, which has many connotations for musicians: the blues, blue notes, the house of blues. Visually there are also many references which will be used in the live video processing: the blue moon, the blue planet, blue water. It seemed that we couldn’t escape “blue” and the titled worked.
AE: Why the decision to "wrap" the work around Douglas Walker's paintings?
JJ: This was both a practical and inspired decision. Dalhousie Art Gallery invited Vocalypse to give a concert during Douglas Walker’s show and we were very inspired by his work which contained many themes from which we could draw improvisational material: The Orient, Other Worlds, Dream States, The Blues. His work is powerful and ripe with inspiring themes to work from and we just couldn’t have made another decision.
AE: "Spring coils, bike chains, strap locks, and oriental balls, all wrapped in ephemeral dream states" - do tell?
JJ: Ah! These are trade secrets which will be revealed on the night. Come and find out!  Let’s just say, we are letting our imagination out of the box and into sound possibilities from unconventional sources.
AE: What can audiences expect from this performance?
JJ: Intoxicating visuals, eclectic electric guitar, rock and roll riffs, heavy metal, an amusing oriental duet, anti-new age whale song improvisation, sounds both processed and acoustic, a world premiere composition by Bob Bauer called Rock and Variations for processed voice and electric guitar. This concert is eclecticism gone wild.
AE: How much of the performance is rehearsed, and how much is improvised?
JJ: All of the performance is rehearsed, including the improvisations…we want to be “in tune” with one another whether the material is written down, in the case of Rock and Variations by Bob Bauer or improvised. Rehearsing the improvisations has given me a lot of ideas for sounds I can draw upon on the night. It’s a lot of fun, especially the discovery aspect.
AE: Aside from this exhibit, how is Douglas Walker connected to Halifax & Nova Scotia?
JJ: Douglas Walker is a longtime friend and professional colleague of the Dalhousie Art Gallery curator, Peter Dijkhuis. He participated in a group show at the Art Gallery of Nova Scotia in 2000 but this is his first solo exhibit here and I hope (given how creative and stunning his work is) it won't be the last. Doug's work is well known in Toronto but the Dalhousie Art Gallery is partnering with The Robert McLaughlin Gallery in Oshawa, Ontario, and Kelowna, British Columbia to produce this cross-country tour of his new, large, architecturally scaled work.
AE: How do Halifax audiences generally respond to "nu" or "experimental" music?
JJ: In general the audience here in Halifax is very open to the “nu”. I have sung all over the world and have to say that Halifax audiences are more attracted to this kind of concert than anywhere I have been. It is humbling and impressive to live here. People are very supportive of experiencing performances which go out there and beyond!
AE: What's next for Vocalypse?
JJ: Vocalypse has several projects in the mix at the moment. This summer we are piloting an exclusive one week new opera program entitled “Opera From Scratch” for composers and singers. Senior opera composer James Rolfe (Beatrice Chancy) will be our mentor for this workshop. We are presenting a project entitled “Howl” in February 2013 for solo voice and are working on an interdisciplinary project about women in Victorian Halifax which will be premiered in the fall of 2013.