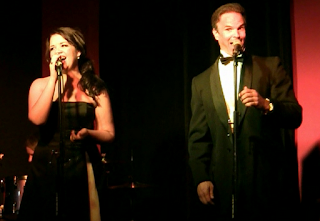 On March 21st, 22nd, and 23rd, Wild Abandon Productions present the next installment of their cabaret series; More Amore. Vocalists Stuart Hiseler and Karen Myatt explore the meaning and mystery of love and relationships from their usual irreverent and sometimes shocking perspectives! From online dating to life-long marriage; the actors’ true, moving, and shameless love-life stories will be interwoven with old, new, and unheard songs. AE spoke with the sultry songsters.
When did you start Wild Abandon Productions and what inspired you to bring this form of musical theatre to Halifax?
We formed Wild Abandon Productions in July of last year and officially incorporated as
a Not-for-Profit Co-operative in December of 2011. After both of us living in New York, we decided to create a show about our experiences as Canadian actors in the Big Apple. Cabaret is such a prominent feature in NYC that it seemed like the perfect vehicle for our story and a style of performance rarely seen in Halifax.
What was it like to study at the American Musical and Dramatic Academy
in New York City?
New York City is an education in itself. For theatre and especially musical theatre it
really is the Mecca. One of the best parts of studying at the American Musical and
Dramatic Academy (AMDA), was the opportunity to study with people that were part of
the theatre community in New York. The intensity of a conservatory program is really the best preparation for the rigors of a career as a performer.
For those unfamiliar, how is cabaret different from other forms of musical theatre?
Generally musical theatre is thought of to be what is known as a “book musical”. That is a
plot based story that has songs that illuminate the plot or characters. Contemporary New York style cabaret uses personal experiences, social or political commentary as a framework to construct stories and interpret songs. Although the dialogue is largely scripted it is designed to sound “in the minute” in style and allows easily for improvisation. Additionally, the format allows for a wide variety of musical styles. For instance More Amore features song from Gershwin to Beyonce from Sondheim to Meat Loaf and everything in between. There’s something for everyone. The venue for cabaret is also much less formal. Casual table seating and of course a bar that is open throughout the performance. The Company House is the ideal cabaret setting.
Did you both write the music/lyrics for More Amore based on your own
true “shameless love-life stories”?
The music and most of the lyrics are from pre-existing works. The art of cabaret is in the
selection of material that suits the personal experiences or points of view you are trying
to convey. We go to great lengths to research, explore and track down the right material.
Not only does it need to be relevant but we also look for pieces that are unknown,
unexpected or have some unusual aspect to them. It can be quite a challenge and we’ve
grown quite good at getting material even writing directly to the composers for copies of
their unpublished works. Then comes the job of rearranging, choosing appropriate keys and structuring the evening. Our wonderful collaborator and keyboard player, Scott Taylor, is a genius at taking our near impossible requests and turning them into something that actually makes sense musically. For instance, the opening medley for this show is about 4 minutes long and has over 40 songs represented. That’s a challenging bit of work! Many of the experiences in the show are very personal. We even have people now say to us “you’re not going to put that in the next show are you?” It’s difficult to pass up a good moment, even if it may be quite revealing or embarrassing. That’s what keeps it real and interesting. We work together to create the dialogue and situations. Generally, if it makes us howl with laughter or tear up, regardless of how sensitive, shocking or revealing it may be we usually agree it has to be included.
There are still moments backstage when we question each other “are we really going
to go out there and do That?????!” We haven’t chickened out yet, it is Wild Abandon
Productions after all.
What can audience members expect from this week’s perfoamnces?
This quote from an audience member we like to think would sum up the experience
from a Wild Abandon show. ".......fantastic…the banter and chemistry.. pure delight, hilarious, mischievous, cute, sweet, raunchy, smokin' hot, wild, crazy, a roller coaster ride on speed and just ****in' amazing.."
Is there anything you’d like to add?
Yes; a shameless plug. Our maiden production, “Immigrant Intent” will be produced as part of Chester Playhouse’s Summer Festival. Look for a restructured and renamed version of the cabaret that started it all!
More Amore until March 23
The Company House, 2202 Gottingen Street
http://www.thecompanyhouse.ca/