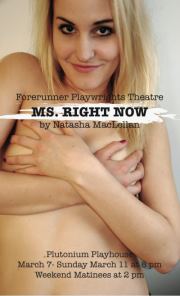 Award-winning playwright Natasha MacLellan’s latest effort is MS. RIGHT NOW, starring Karen Bassett, Mary Fay Coady, Ben Irvine, Margaret Legere, Kat McCormack, and Paul Van Dyck. The work premiers tonight at the Plutonium Playhouse in Halifax.
How long have you been involved in theatre?
I have been doing theatre professionally for about 11 years.
What inspired you to produce MS. RIGHT NOW?
I've been writing this story for about five years now. The idea for the play began with an article in McLeans magazine, about the rise of raunch culture. The article referenced the book Female Chauvinist Pigs by Ariel Levy. The book is about women who believe objectifying themselves before any man can objectify them, is the next logical evolution of Feminism. That is what got me to thinking about my character of Alison. My play is not about raunch culture but about one girl who dabbles with it.
What are the biggest challenges of the gig?
Well, it is a six-person play being done on a shoe-string budget, so that is a challenge. Aside from that, it deals with sexuality and relationships and trust/betrayal. We are presenting it in a small room, and the audience is in close proximity to the stage. That is always a bit of a challenge, especially with material as intimate as this.
What are the rewards?
I get to see my first full length play produced in a venue full of good memories for me. I was in a fringe show there two years ago, NAKED by Lisa Rose Snow and directed two plays there: FAT PIG by Neil Labute and IN THE VALLEY, which I also wrote.  This will also be the final show at the Plutonium Playhouse, which makes me sad.
What can audiences expect to experience during the run?
I don't know if I can predict what they would experience. But I do hope it makes them talk about what they experienced with each other. That's all I ever really hope for.
What are your thoughts on the current state of theatre in Halifax and Atlantic Canada?
Theatre in Halifax and Atlantic Canada is thriving. People are producing really wonderful and innovative work, which is commendable given the money situation. It is getting harder and harder to produce theatre here. The budget I have for Ms. Right Now is the smallest budget I have ever had for a show. I am happy to be doing it, and I am proud of the show - however, I have finally reached my breaking point. Now I know how little is too little. It's sad to think that is one of the things producing my first full-length play has taught me, but there you have it.
Until March 11. For reservations call 902.423.4653