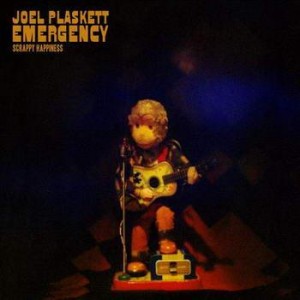 For CBC’s 2009 Song Quest, Joel Plaskett wrote, recorded and mastered a song about the Cabot Trail, “On the Rail”, in just ten days. The thrill of this whirlwind experience inspired Plaskett’s most recent album, Scrappy Happiness, recorded in only ten weeks. “Why do we always have to wait six months for things to come out?” asks Plaskett. “I think that pointed me towards this project – that idea of having things not take a long time to go from the studio to the public”. Leading up to Scrappy’s March 27th release, he and The Emergency recorded and produced a new song each week to be played on CBC Radio 2 and 3 every Tuesday.
Happiness should be Scrappy…
The name “Scrappy Happiness” relates to the rapid song-a-week manner in which the album was produced. “The idea is that if you let go of it, it might be scrappy, but as long as there’s some happiness involved, it’ll be good,” Plaskett muses. He explains that one of the record’s overarching themes is valuing the imperfections in things that make you happy. Plaskett uses the last line from Week Three’s Old Friends as an example: We’re you there, when the spirit spilled? Some kinds of love can’t be distilled. “You try and figure out what it is that makes you love something or someone, but you have to take the good with the bad,” he reflects. “Try as you might to make things right or perfect, you can’t distil every form of love. It’s like alcohol – it can’t be 100% pure or else it will kill you”.
Creative Scrappiness is Happy…
Plaskett shares that since the release of Three (2009), he feels more liberated when it comes to songwriting. Three reflected both the “goofball” and autobiographical - sometimes “dark” - sides to his personality; and, since it was warmly received by critics and fans, Plaskett realized he did not have to hold back.  “I don’t feel like I have to edit at least the initial phases of the creative process anymore. I might have once felt, ‘I’m not going to even finish this. This is stupid!’ But now I feel, ‘Let’s finish this and see if it’s stupid!’ It’s trying to embrace just what my brain naturally does”.
The Scrappy Happiness Tour
Joel Plaskett Emergency is soon starting its Scrappy Happiness tour (April 13-May 19) with Dave Marsh on drums and Chris Pennell on bass. Marsh and Plaskett have been playing together since 1998. Plaskett shares they’re good friends with differing personas. “We don’t love all the same things but where our tastes connect is where a lot of our musical mojo comes from in the Emergency. There’s a degree of combat between my guitar playing and Dave’s drums that makes the band exciting, particularly in the live show when we get going. Marsh is a seriously talented guy”.
For information on tour dates and the making of Scrappy Happiness, check out:
http://joelplaskett.com/