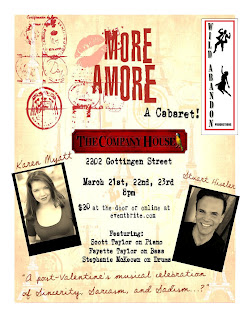 More Amore
March 21, 2011
The Company House, Halifax
By way of songs that are both “sentimental and semi-mental”, the dynamic-duo of Stuart Hiseler and Karen Myatt leave no side of love unscathed in More Amore, a two-hour, two-set comical cabaret that covers the chronological gamut of romance.
From the trying teen-years to the awkward amblings of old age – and from the profound to the profane - the work succeeds at exploring themes of longing, belonging and identity in a light and lyrical manner.
Opening with a mixed medley of modern and mid-century popular chansons, Hiseler and Myatt soon set into a series of sexy, saucy and sassy duets and solo pieces.
Highlights of the performance included the clever two-piece Moving Right Along, and the upbeat, quick-witted Cubicle of Love, which showcased the couple’s sure on-stage chemistry. The brilliant (and gut-busting) We’re Breaking up and Lady Part are worth the price of admission alone.
The in-between bantering worked well also, particularly Myatt’s recounting of an online dating experience with a young man who sends her a photo of himself posing as a Dallas Cowboy cheerleader.
Certainly strong as an ensemble, each entertainer had their moments to shine separately; Hiseler’s manic antics during Stalker were so eerily on-target that I am re-considering my decision to add him as a friend on Facebook. Myatt’s rousing rendition of I’m Not Pregnant, I’m Just Fat was a moving mélange of burlesque, blues, gospel and soul, all-dolled-up in a pretty package.
Aside from the mandatory opening-night jitters, and a few minor wardrobe malfunctions (the nipple slip!), the festivities were fresh, fluid and funny.
And though both couple and crowd seemed comfortable with the informal environment, the performance perhaps appeared out-of-place on Gottingen St.
While The Company House might be a fine venue for emerging artists of all arrays, a production of this sort deserves a more fitting fate and would be better served at the Neptune Theatre or the Rebecca Cohn Auditorium.
As such, Hiseler and Myatt - each vocal protégés of Halifax-based diva/soprano Janice Jackson - are well on their way to bigger and better things, both in their individual careers and as a pair extraordinaire. That said, be sure to see and them now while you still can. ~ SPC
More Amore until March 23 at The Company House, 2202 Gottingen St., Halifax
http://www.thecompanyhouse.ca/