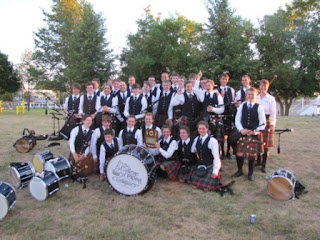 By Kylie MacHattie
If a pipe band were to fundraise for an opportunity to compete at the World Pipe Band Championships in Glasgow, Scotland, what would be a more appropriate fundraiser than a Scotch whisky tasting? The College of Piping and Celtic Performing Arts of Canada’s Pipe Bands, from Summerside, PEI, are doing just that.
After winning the Grade Four North American Pipe Band Championships, the College of Piping Grade Three Band (the Grade Four band was upgraded to Grade three) now has their sights set on the World Pipe Band Championships in August 2012.
To play on an international level has been a dream of many of the players in the band. Most had never been farther west than Fredericton before the trek to the North American Championships in Maxville, Ontario and some have never been farther east than Halifax. The College pipers and drummers are eager and motivated to play on the Glasgow Green (the park where the Worlds is held) with 40, 000 spectators and 8,000 pipers and drummers, competing against 16 other nations and contending for one title in their respective grade levels. Now it’s just about raising the funds to get there…
On March 3, 2012, College of Piping Pipe Bands are hosting a whisky tasting. The tasting will be held in the penthouse suite in The Holman Grand Hotel in Charlottetown at 7pm. If you are over the age of 19 and like to indulge in a dram or two, this event is for you!
The tasting will be hosted by Frank Scott. Frank co-owns and manages the Lunar Rogue Pub in Fredericton, New Brunswick, which received "one of the best whisky bars in the world" awards from Whisky Magazine, a UK publication. His knowledge is second to none as he has been Chair of Canada's oldest Whisky, Spirits and Liqueur Festival for the past 16 years.
Each whisky will be paired with a food to complement its flavour. Some of the pairings for the evening include Glenfiddich 15 Year Old with smoked salmon and Glenmorangie Original with seared scallops.
Tickets are limited and must be reserved by calling the College at 902-436-537. All proceeds from the evening go to the College of Piping Pipe Bands. Your support is greatly appreciated! – Kylie MacHattie
Kylie MacHattie is a Highland Bagpipe Instructor at The College of Piping. She began piping when she was seven and as a teenager was already playing in Grade One level bands. www.collegeofpiping.com