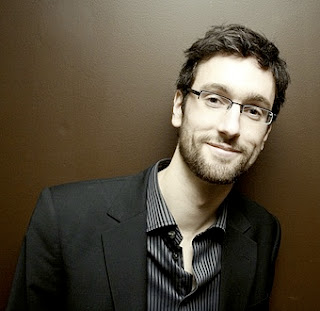 Singer-Songwriter David Myles has been nominated for five ECMA Awards this year. AE finds out what makes Myles move.
What do you regard as the lowest depth of misery?
Being without any loved ones.  No family, no friends, no partner. That would pretty much be the worst. I love alone time, but the idea of being alone in the world eternally is pretty bleak.
Where would you like to live?
Near my family, ideally. I've lived in a number of places over the years and I have come to realize that I can be pretty darn happy and fulfilled anywhere as long as I have a good crew of people around. And a guitar.
What is your idea of earthly happiness?
Good health, good love, good food, good music.
To what faults do you feel most indulgent?
Worry.  I spend far too much time worrying. I once heard that worrying was like praying for the things you don't want to happen.
Who are your favourite heroes of fiction?
Japhy Ryder.  He's the protagonist in "Dharma Bums" by Jack Kerouac. His character is based on a still-living Eastern philosophy scholar and poet Gary Snyder. I read the book when I was 18. It was an impressionable time and I remember thinking that Japhy Ryder was the coolest dude ever.
Who are your favourite characters in history?
Martin Luther King Jr. A man who stuck to his vision of what the world could and should be. For the last four years I've been going to Memphis, Tennessee each March and each time I go to the Civil Rights Museum. To read his words and learn about the incredibly principled leadership he provided is unbelievably inspiring.
Who are your favourite heroines in real life?
My mom. Our house was wild at times. Four boys and my dad, all with an exceeding amount of energy running around, making noise, getting in fights, and she managed to be the rock that we all needed to keep us grounded. She was the most reliable source of love you could ever dream of as a kid.
Who are your favourite heroines of fiction?
Jane Eyre. She was so bad ass in the best way possible. Her passion for a truly fulfilling life, not just the one prescribed for her, makes her an eternally inspiring character.  Though she was sceptical of social norms, she lived by an extremely strong moral code.  Much stronger than those telling her how to live.
Your favourite painter?
I'm really into Mark Rothko these days.  Seeing his huge paintings in real life has given me a totally new appreciation for abstraction and how colour in itself can really create an emotional response.
Your favourite musician?
Of course, a very tough task to choose one. Over the last few years, I've been totally into Ray Charles because of his ability to make a song his own no matter what the genre. He had a voice that goes from pure sweetness to totally raw and real. Plus, he could play piano like the best of them.
The quality you most admire in a man?  It may sound weird but I really admire
self-discipline. I admire the ability to ignore the fleeting distractions in life, usually associated with our most temporal desires, and really focus on what makes our lives and the lives of others more fulfilling in the long-term: such as good relationships, good food, good music, and good health (as mentioned above).
The quality you most admire in a woman?
The women I've known have always been a bit more self-disciplined than the men.  I'd say the thing I've always admired in the women in my life is their ability to truly empathize and be compassionate. I really admire that amazing ability to relate to another person's suffering, whatever it may be, and to make them feel better by making
them feel less alone. That's a very powerful force.
Your favourite virtue?
Justice.  For me, it's kind of the bedrock virtue. As Peter Tosh said "There'll be no peace without justice".  I reckon he's right. It's so important that we all strive and maintain a sense of justice in both our personal relationships and our communities in general.
Your favourite occupation?
I do truly love being a musician. I love the way it allows me to connect with people from all sorts of backgrounds. Music is one of the few forums where we can really feel united.  There's enough in this world as it is that pulls us apart. I want to make music that brings us together.
Who would you have liked to be?
Though he died young, the impact of Bob Marley's music is still being felt around the world today.  It's awesome. Great music that transcended borders with one overarching and ever-present message of love. Can't beat it really.
http://www.davidmyles.com/