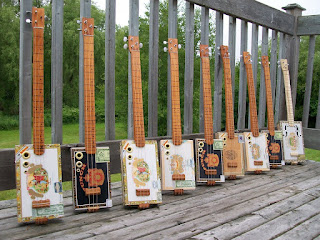 A few years back, Darren Brown, while looking through an old magazine, came upon an image of a cigar box guitar. That was by no means Brown’s first exposure to handcrafted instruments, but immediately a new passion stirred inside.
Cigar box guitars date back to circa 1840 when cigars began to be packed in boxes of 20-50 rather than in crates of 100 or more. Brown explains that homemade instruments made of everyday items arose all through the 19th century in impoverished communities so that inadequate funds did not limit musical expression.
“They’d take a piece of piano or fencing wire and string it on a stick or a board, put tension on it and play it with a bottle slide or hit it with a stick. Or they’d put that board on the wall and get more tone from it. Then they’d use old horseshoe nail boxes or anything they could get their hands on,” Brown describes. “Once cigars started coming in smaller boxes, instead of big crates, they started using those. But then it just kind of disappeared through the years”.
From his Canning, Nova Scotia workshop, Brown is making sure that cigar box guitars do not permanently disappear. In fact, the instruments are becoming popular once again among contemporary musicians. Award-winning blues legend, Morgan Davis, the “King of the Cigar Box Guitar,” Shane Speal, alternative country-folk musician, Olds Sleeper, and Juno winner/singer-songwriter, Colin Linden, are just some of the artists that own and play a DB Customs original. “Morgan took to that three-string like a duck to water,” Brown shares. “He’s got a couple songs on his new CD with the three-string and he’s really good at it. He told me it really brought him back to his roots”.
Over the last three years, while maintaining a full time job with Ace Carpentry, Brown has made 159 guitars. His customers range from beginner to veteran musicians. “Anyone can play them, especially the three-strings,” Brown explains. “You can put your finger pretty much anywhere on the fret board and push down on one string and you’ve got yourself an automatic tune. And then you can take a butter knife or a bottleneck slide to the strings and it gives you that real, authentic Delta sound”. Brown adds that even his eight year old niece is able to improvise on one of his three-strings.
Just like he taught himself how to play and repair guitars in his earlier days, Brown learned through extensive experimentation how to make the three-, four-, five- and six-string cigar box instruments, both electric and acoustic, and even how to wind his own pickups. He credits part of his hands-on curiosity to his dad’s friend Bill Tupper from Centreville. “I’ve known him since I was about eight years. He’s always hand-built mandolins and fiddles and I’ve watched him,” remembers Brown. “He tuned my first guitar”.
Not one DB Customs’ guitar is alike. Some of the cigar boxes he orders from the States, while others he makes himself out of cedar or hardwood. He then commissions folk artists to paint them. “I’ll go up to the Bay of Fundy and I’ll find different driftwoods, like maples and cherries, and use that for my necks. Now I’m getting into the exotic woods, like rosewood and abalone, for inlays. I can’t see any end to it,” laughs Brown.
Brown states that for $350, he’ll make you a nice cigar box guitar with a hand-wound coil, volume and tone control, a maple neck and a sunburst finish; he also makes fretless guitars for kids starting at $120 and electrics starting at $240. While on Dragon’s Den, the panel of investors, who consequently bought most of his display, recommended he triple his prices. But Brown disagrees. “I said no. You have to be real and that way everybody’s happy”.
Darren Brown is certainly happy spending long evenings and weekends creating handmade instruments for music lovers. He says his guitars, capable of withstanding the elements, are perfect to play ‘round the campfire, at festivals or at spontaneous kitchen parties, not to mention recording studios. Brown himself is quite the musician and often jams with family and friends to produce blues, rock and country tunes.
Observing the variety of Brown’s creations, many would call him an artist or a craftsman, but he doesn’t see it that way. “I approach it a little bit artistically to see the design and flow, but mostly it’s from working construction since I was 15 years old. From that I developed a good work ethic, determination and I never turn back when failure comes”. ~ Michelle Brunet
http://www.dbrowncustoms.blogspot.ca/