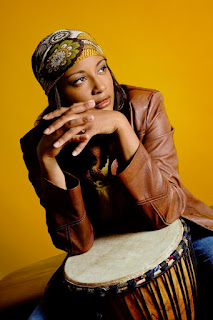 For as long as she can remember, music has been a part of Shauntay Grant’s life; Sunday mornings immersed in gospel tunes, hours devoted to the piano and cello, arranging pieces for her high school’s productions and singing in, even conducting, various choirs made up the soundtrack of Grant’s youth.

The power of words has also been a passion for Grant. As an adult, she served as Halifax’s Poet Laureate (2009-2010) and authored award-winning children’s books. She continues to host CBC Radio’s “All The Best” and wows international audiences with her spoken word.

“Words and music have always been central to my life,” shared Grant. “As an artist, I don't really differentiate between my artistic practices -- my songs are my poems, and vice versa”. Her dual absorption gave rise to WordRhythm Productions – a collaboration between musicians and spoken word artists who perform, lead creative workshops and host social justice events.

Each WordRhythm show offers something fresh. “At the Halifax Jazz Festival last year, there was with a three-piece band and a vocal ensemble,” Grant recalled. “Before that there was a show involving dub poetry and beatbox”.

In February, Jazz East coordinated a WordRhythm show for African Heritage Month featuring Chelsea Nisbett, Tesia Rolle, Suzy Hansen, Dominique Oliver-Dares and Nicole Brown with Geordie Haley on guitar. Grant called it a performance-workshop as it was the first time performing in public for several of the artists. “It's really been a space for the artists to explore their talents and try new things,” Grant described before the show.

On Valentine’s Day, the Spring Garden Road Library venue was packed to hear the sextet sing in beautiful three and four-part harmonies and read their powerfully poignant verses. At one point, the girls invited audience members to spontaneously share: Who’s got something on their mind…Whose got a poem in the house… was sung until one brave soul stood and soliloquized.

Grant’s spoken artistry ranged from the humorous and reminiscent to such enormous depth, especially from her Life Lessons. Her melodious voice soared above the djembe beats and morphed into hip hop tones at times. What was most captivating was Grant’s continuous encouragement for her co-performers to reveal their once hidden talents. Audience members expressed their connection to the performers through finger snaps, laughter and concurring murmurs. ~ Michelle Brunet