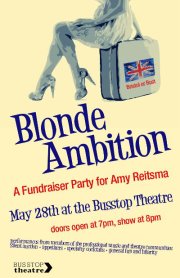 Nova Scotia performer Amy Reitsma is no stranger to the problems of her profession – funding being at the very forefront of necessities. To that end, the local thespian is raising much- needed cash to further her career aspirations to study at the Bristol Old Vic Theatre School in the U.K. via an fundraising drive. As part of her efforts, Reitsma – along with a number of her notable peers, including Jeremy Webb, Martha Irving and Bill Stevenson – will partake in an evening of old-fashioned fun on Monday night at the Bus Stop Theatre in Halifax. The soiree will also feature a silent auction. Recently AE spoke with the aspiring actor about the event and about Atlantic Canada’s growing theatre arts.
When and why did you get involved with theatre?
I started getting involved when I was 9 years old. My mom had many friends at the old Neptune Theatre, so we used to go to plays and musicals quite a bit in my youth. I always loved acting and watching theatre, but wasn't bitten by the bug until I met a young actor (who was probably 11, but seemed 18 and completely worldly at the time to my 10 year old mind) at an opening night party of the play 1949. He mentioned something about 'not getting paid enough' and it dawned on me that people actually got paid to perform. I thought that sounded like the best job in the world.
Are they the same reasons that you do it today?
Yes and no. Money is definitely not why I'm in this business, but the sheer love of the art and the people who make it hasn't changed. I never want to be someone who lives for the weekend. I've tried 9-5 and it doesn't suit me at all. Sometimes I wish it would, because I think it would make some of the choices I've had to make a little simpler. The grass is always greener, I suppose.
What are the challenges of the profession?
There are many, as there are in all professions. I find staying positive and staying motivated can be hard when you are in the midst of a dry spell. Certainly financial issues are frustrating and stressful at times. Also keeping yourself grounded and honest when it's time to network, and not losing yourself to the machine that the arts can be. That's the most important. Staying true to yourself and reminding yourself why you wanted to be an actor in the first place.
What are the rewards?
You get to do the job you love. Not many can say that. That's a huge reward.
Tell us about the fundraising drive.
There are many veins to this. I started an online donation site at where people can donate any amount online. It is directed into my PayPal account two weeks after the deadline (Aug 15). It’s a wonderful resource for people who are fundraising. I also have been canvassing local businesses to contribute to a silent auction, which will take place at the performance fundraiser/ party on May 28th at the Bus Stop Theatre. I'll be having friends perform at this event: they include Jeremy Webb, Martha Irving, Deb Allen, Bill Stevenson, Lisa MacDougall, Ryan Doucette, Mary Fay Coady, Keelin Jack, myself, Anders Balderston, and Emily Shute. There will be appetizers, specialty cocktails for purchase as well as a full bar and dance party afterwards if people so desire. It's going to be a great time. Doors open at 7pm, show starts at 8. Tickets are $20 at the door. Other than those, I've been receiving donations from my community in St Margaret's Bay due to an article that was published in the Masthead News, upon the request of a friend I performed at Melville Heights Seniors residence, I've applied to every grant that I am eligible for, and I'm in the midst of a massive letter writing campaign to arts supporters around the Atlantic Provinces.
What has the response been like so far?
It's been great! I'm a bit overwhelmed by how open and receptive people have been to this. Indiegogo has almost reached the halfway point in a week, and the support from the arts community has been beautiful to experience. I think people are happy to be contributing to something that is fundamentally positive.
How can people help/get involved?
Come to the fundraiser on Monday! Contribute on indiegogo! Or, if you can't, just spread the word. Share my indiegogo campaign- you can find it on indiegogo.com/blondeambition. And spread the word! This is what makes or breaks fundraising campaigns. I also have some posters that need to be put up... :)
What are your thoughts on the state of theatre in Halifax & Atlantic Canada?
I think theatre is in good hands here. I wish there were more opportunities to study or train, and I wish there was more work. Companies like LunaSea, 2B, Zuppa, DaPoPo, Forerunner, among so many others are doing a great job of making sure that independent theatre doesn't die, despite the cutbacks to the arts that we are all experiencing. It's a hard time to be an artist in Canada, and I take great pride in my peers and have great hope for and faith in their future work.
What can we be doing better?
We can be encouraging our youth to go to theatre. We should be teaching them the value of live theatre and performance. We should be fighting the cuts that are being inflicted upon the arts in Canada, and we should be getting out there and supporting the arts by seeing shows and talking about them.
www.indiegogo.com/blondeambition