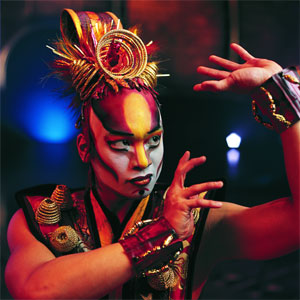 A soiree with the Cirque du Soliel should be on everyone’s bucket-list. The Montreal-based, multi-disciplined performance troupe is world-renowned for its spectacular performances.

Dralion, which runs until May 6 at the Halifax Metro Centre, is a magical mélange of music, dance, acrobatics, comedy and the visual arts. Vibrant, exotic and bold, the show is more than a spectacle; it is an experience not to be missed.

Dralion is a signature Cirque du Soleil production acclaimed by more than seven million people worldwide since it premiered in 1999 in Montreal, Canada. After many years performing under the big top, Dralion will now be presented in arenas throughout the United States and Canada, with the same quality performance. Fusing the 3,000 year-old tradition of Chinese acrobatic arts with the multidisciplinary approach of Cirque du Soleil, Dralion draws its inspiration from Eastern philosophy and its never-ending quest for harmony between humans and nature. The show’s name is derived from its two emblematic creatures: the dragon, symbolizing the East, and the lion, symbolizing the West. In Dralion, the four elements that govern the natural order take on a human form. Thus embodied, each element is represented by its own evocative colour: air is blue; water is green; fire is red; earth is ochre. In the world of Dralion, cultures blend, Man and Nature are one, and balance is achieved. Bearing the unmistakable signature of Cirque du Soleil and featuring 50 international acrobats, gymnasts, musicians and singers, Dralion soars to new heights as it defies the laws of nature.

The primary sources of inspiration for the costumes of Dralion come from China, India and Africa. The palette favors vibrant solid colors, while the shapes are guided by the artists’ movements and choreography. Each of the four elements and its associated family are represented by their own unique color. Blue is identified with air, green symbolizes water, red is for fire, and ochre represents the earth. A few facts;

• Over 5,000 meters (16,000 feet) of fabric were used in creating the costumes;
• The fabrics come from regions around the globe, including China, the United States, Italy, France, England and Quebec;
• Materials that might be considered unusual were used in creating costumes and accessories: horse hair, raffia, metal, window screen, emu feathers, crystals, styrofoam, plastic, bubble wrap, fun fur, springs and an array of hardware items;
• To create the texture on the chest plate of the singer’s costume, bugs were glued on and then molded into different shapes;
• The artisans at the Cirque du Soleil costume workshop in Montreal worked for over three months fabricating the original costumes, hats, wigs and footwear required for Dralion. New costumes are continuously made.
• The majority of the Dralion costumes are custom-made for each artist, including shoes
and head pieces. • Dralion has close to 1,500 costume pieces including shoes, hats and accessories.
• The Dralion wardrobe team includes 4 permanent touring staff and 3 local wardrobe employees in each city. The wardrobe team is responsible for maintaining and repairing all costumes.
• The Dralion tour travels with washers and dryers because most costume pieces are machine washable and then hung to dry.
• Over 300 pairs of shoes are cleaned and painted by hand every week.

Blending Eastern and Western sounds to create rhythmic and lyrical motifs, the electric and acoustic Dralion score draws its inspiration from classic Indian melodies, weaving in influences from Andalusia, Africa as well as Central and Western Europe. The band is composed of six musicians and two singers who perform live for every performance.

A mammoth structure creates the huge backdrop that dominates the stage. This metallic set piece is 60 feet wide and 26 feet tall and is suggestive of a futuristic Chinese temple or a giant plate of medieval armor. The most imposing feature is the wall which spans
the full length of the stage. Covered with perforated aluminum tiles, the wall is strong and resilient while giving the impression of being light and flexible. The six giant claws attached to the structure allow artists to climb and suspend themselves from the wall. Three concentric aluminum rings are suspended high above the stage. The first serves as a catwalk for performers and technicians. The second is used to support technical and acrobatic equipment, including the enormous lantern that descends at the end of the first half of the show. The third ring is used to move performers up, down and through the world of Dralion.

Dralion, until May 6th at the Halifax Metro Centre
http://www.cirquedusoliel.com/