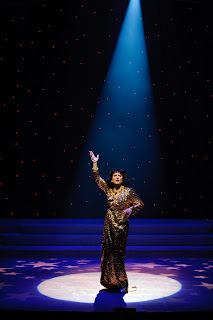 Actor Steven Gallagher has found his dream role as Albin ~ the quirky, loveable cabaret drag queen ~ in Neptune Theatre’s vivacious production of La Cage aux Folles. Recently he opened up about his professional past, present and future.
What inspired you to start acting?
My dad was involved in community theatre, and I remember being allowed to attend weekend rehearsals with him when he played Fagin in Oliver. I was 8 years old, and I kept thinking that the 12 year old who was playing Oliver was far too old for the role. It was a thrill to be included in something so special.
Are they the same reasons that you do it today?
Well, I've been doing it for so long now, it is how I make my living. But every once in a while a show like La Cage Aux Folles comes along that transcends musical theatre, and makes one feel like they are part of something bigger. I wish every experience could be as fulfilling.
What are the biggest challenges of the profession?
Finding my next job. It's like contract work, and you have to keep up the hustle to keep working.
What are the rewards?
Working on a show that is artistically and emotionally challenging will always peak my interest. I would rather work on a Fringe show for no money that is a joy to be a part than something that would just be a paycheque. Luckily, La Cage has been one of those rare experiences that have been completely satisfying on every level.
How did you get involved with La Cage aux Folles?
I emailed George Pothitos the director, whom I had worked with many years ago, and I campaigned for the role! He is one of our finest directors of comedy, and I knew that in his hands the show would be funny and touching. Then I auditioned for the Artistic team, George, Patrick Burwell and Mike Jackson in Toronto.
What do you enjoy about the role?
Albin is a dream role. He is funny, heartbreaking, melodramatic, generous, egotistical, and fragile - basically a well rounded human being. And the score is unbelievable. Getting to sing those songs every night is a dream come true.
What can audiences expect during the run?
They can expect to laugh a lot. And I hope that the audience walks away with a sense of pride that they are supporting a show that talks about equal rights and acceptance. In a time when gay rights still come under fire, we show that a family is a family no matter how it is composed.
What's next for you on the stage?
I will be performing Amelia: The Girl who Wants to Fly ~ a three person show about Amelia Earhart at The Thousand Island Playhouse in Gananoque.
Photo of Steven Gallagher as Albin by Applehead Studios
La Cage aux Folles at Neptune Theatre in Halifax until May 27
http://www.neptunetheatre.com/