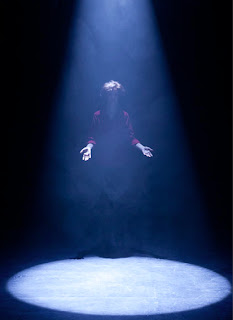 Going On
Neptune Studio Theatre, Halifax
May 19-20 2012
Moving onto the stage as an understudy in performances with Peter O’Toole. Moving forward on the path to mindfulness with a Buddhist retreat in Cape Breton. With those experiences, going forward with relationships and with aging.
In a one-woman play she both wrote and performs in, Elizabeth Richardson portrays an amazing array of at least a dozen characters. Going On is quick moving and well performed. With everything from singing “Mrs Worthington, Don’t Put Your Daughter On the Stage” to impersonating British actor Peter O’Toole (from Lawrence of Arabia fame), Richardson shines.
In an interview featured in Tuesday May 15th’s Arts East, the Artistic Producer of the SuperNova Festival through Eastern Front Theatre, of which Going On was one of eight featured performances, says that “Art reflects life back to us and when it’s good art it is true and we see ourselves up there on the stage.” Using Rhindress’ explanation of good art, Elizabeth Richardson’s play Going On is certainly good art.
That is not to say good art is easy art. Richardson’s play demanded a lot from the audience – both in terms of attention and reflection. Just like the play demanded all of Richardson, the play demanded the same of the audience, as if they too were on stage. The cast of characters she moved through and the non-chronological nature of the work meant that to keep up, the audience needed to make the same jumps in personality and time frame (admittedly, as an audience member, at times I was a bit confused and wished for a moment to catch up in the marathon of realizations). However, it should be noted that the production did try to guide the audience through lighting and verbal cues.
That may have been the beauty of Going On. Like life, it’s not until after the events are complete that you have a moment to connect all the dots and see how a certain event in your life influenced other portions of your life. For Richardson, it was the demands of trying to negotiate the path between being a practicing actress whose life is lived on stage and being a practicing Buddhist whose mindfulness happens internally that is portrayed. The apparent paradox is revealed through both her phone conversations with her mother and her relationship with herself in meditation.
The play’s run at the SuperNova Festival is the Canadian debut of the play, which had its world premiere in Mexico in February of this year. Richardson was raised in Toronto and studied acting at the London Academy of Music and Dramatic Arts. Her Buddhist retreat in Cape Breton, and her appearance in the Halifax’s Neptune Theatre’s production of Frankenstein earlier this year tie in nicely to SuperNova’s theme of stories that speak of life in Nova Scotia. ~ Jen Powley
Sunday, 7pm at the Neptune Studio Theatre in Halifax
http://www.easternfronttheatre.com/