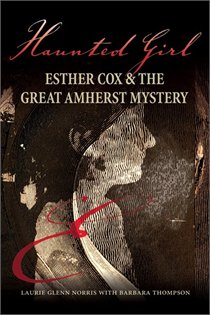 Haunted Girl: Esther Cox & the Great Amherst Mystery
By Laurie Glenn Norris (with Barbara Thompson)
Nimbus Publishing/ 176pp / $17.95
Often lauded as “Canada’s best ghost-story”, the tale of Esther Cox— an Amherst woman, who claimed to be haunted by as many as six different spirits at one time— has puzzled historians and locals alike, for over a hundred years. Were the unexplained fires at the former 6 Princess Street caused by paranormal forces at work, manifestations of an underlying illness, or just an attention-grabbing plot cooked up, under the guidance of a greedy opportunist, by a girl who feared abandonment? In this compelling account, authors Laurie Glenn Norris and Barbara Thompson attempt to reconstruct Esther’s shrouded life and, with the help of several experts and distant relations, bring the Great Amherst Mystery to light. With its vivid descriptions of nineteenth-century life and attention to detail, Haunted Girl is a non-fiction biography that is equal parts informative and entertaining. ~ Laura Valvasori-Black