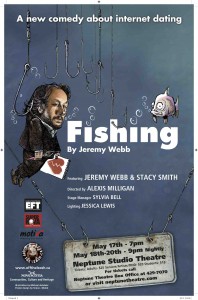 Gone Fishing!
Neptune Studio Theatre, Halifax
May 18, 2012
Atlantic Canadian audiences have come to expect both warmth and wit from Halifax actor/writer/comedian Jeremy Webb.
Both were in effect last night, as the U.K-born ham-on-wry presented his latest effort, Fishing, as part of the SuperNova Theatre Festival.
Based on Webb’s own real-life experiences, the 90-minute production is a fun and fascinating foray into the sometimes murky depths of online romance.

Three-years divorced, Paul Fisher (“Call me Fish”) receives an invitation to his ex-wife’s wedding. Desperate for a date, the 44 year-old does more than merely dip his toes into the waters - he dives right into the deep-end.


Drawing upon a pool of potential partners, Fish lands 7 hook-ups in 7 days. Armed with a dozen rules, the bachelor weeds his way through the stock, failing to net a catch. En route, theatre-goers are treated to musings and morsels concerning our endless yearnings for “the one”, the nature of adult relationships, and the new paradigm of shopping online for ever-elusive love.
While often over-the-top, the work is well-tempered by Webb’s sense of subtlety; the sly glances and soft responses succeed at off-setting the outrageous – all the hallmarks of a seasoned, though at times spicy, thespian.
The simple props – tables, chairs and a raised computer screen complete with an interactive website (gone-fishing.net) – allowed the actor plenty of space to bring a real physicality to the show (singing, dancing, etc…).
Kudos as well to Stacy Smith for her seamless performance(s) as all of the women in Fish’s life (Mother, friend/boss and dates), and for knowing her role on the stage, thus bringing out the best in her counterpart.
Saturday, 9pm / Sunday, 9pm at Neptune Studio Theatre in Halifax
----------
This is Cancer
Neptune Theatre, Halifax
May 18, 2012

Who knew that cancer-personified wears converse sneakers, sings, dances, swears on occasion and quite endearing? This is how Bruce Horak, a survivor of cancer resulting in 90% vision loss, portrays the disease.

Last night, This is Cancer inspired an intimate audience to loads of laughter as “Cancer” shared his Greek god origins and long list of “lovers”. Interactions with his mute assistant Lucinda spurred the comedy further and refreshingly broke several theatrical conventions. Horak also incorporated serious and touching elements into the show, like a recording from his real-life father shortly before cancer claimed his life. A natural improviser, the actor challenged audience members to break out of their comfort zone to share some of their own feelings surrounding the deadly disease. This is Cancer is a therapeutic laugh fest, a treasure-trove of testing taboos, and a moving narrative that will inspire audiences to seize the day.

I, Animal
NeptuneTheatre, Halifax
May17, 2012
There is a lot to like in Daniel MacIvor’s latest work, I, Animal, one of many good home-grown productions that make up this year’s SuperNova Theatre Festival.
The clever Cape Breton scribe has done-well to craft a 90-minute bigger picture from three smaller 30-minute vignettes, all the while doling out tidbits of homespun humour and philosophy.
In the first piece, Antonio Cayonne is bold and brash as a young gay nurse,struggling with both sexual and professional identity. His call-and-response with an invisible dog is a nice side-dish to his deeper musings on the oft-perplexing human condition.
Stewart Legere starts small in the second segment, but quickly comes into his own as a rebellious and lovable teen twisting and turning with the tides of life.Several subtle references to sheep, and questions concerning the nature of human consciousness, noted that perhaps we are not that far removed from our furry brethren as we aspire to be.
Perhaps the performance’s only hiccup occurs in the third person, literally. Despite Kathryn MacLellan’s convincing performance as a meandering, middle-aged pleasure-seeker (the child-like yearnings for a horse were beautiful), severalill-timed pauses and some discordant dialogue brought the show to stops and starts – no fault of the veteran thespian, however, as the script perhaps simply needs some small fine-tuning.
That said – and while it might not be MacIvor’s strongest work to date – there is more than enough here for an entertaining and enlightening soiree.
Saturday, 2pm / Sunday, 4pm at Neptune Studio Theatre in Halifax
www.easternfronttheatre.com